Fri 10:15am: Building a Movement to #EndPoverty in America

Poverty isn’t what the statistics say. Poverty is the lived experience of real people in America—the almost 8 out of 10 of us who live paycheck to paycheck. But some organizations and activists—including Joe Sanberg’s Working Hero Action—are working to change the conversation around poverty and put poverty front and center in the national political conversation. The problem isn’t just that we’ve failed to end poverty in America; it’s that in the last few decades, we’ve stopped trying. Join us for a conversation about some of the real solutions we can take in our communities and country to end poverty in America.

Rania Jamison is a dynamic anti-poverty advocate, motivating political consultant, and powerful change agent. A creative and energetic leader with the ability to communicate vision and inspire action, Rania has gained awards working in the education, government, health, non-profit and political sectors. Her work continues to have a lasting positive impact on transforming communities. Rania served as the South Carolina State Director for Working Hero Action, working with 2020 Democratic Presidential Candidates, national and state leaders to elevate the issue of poverty and create awareness about the Earned Income Tax Credit.

With two decades of experience as a skillful organizer of high-profile campaigns, programs and events, Rania has a reputation for getting things done. From engaging and advising elected officials to organizing grasstop leaders, Rania is often behind the scene working to transform the status quo. As president of her own public relations firm, Purpose Promotions, Rania’s recent clients include the Obama Foundation, Dominion Energy, SC Democratic Party and Columbia, SC Mayor Steve Benjamin.

Her previous work includes serving as a Public Involvement Manager for the Richland Penny Transportation Program and as the voice of the South Carolina Census Campaign gaining the state national accolades for record participation improvement and an additional seat in the U.S. Congress. Rania has worked as a key strategist on local and statewide campaigns including the Vote For Our Libraries Campaign; which has revolutionized the libraries across Richland County; leading a communications effort advocating for Riverbanks Zoo, South Carolina’s top tourist destination, to adopt a smoke-free policy, which remains in effect today; and, having a direct impact on the college and career plans of over 20,000 high school and college students throughout the Southeast as a top-ranked speaker for the Monster.com.

Jamison is a trained Poverty Simulation Facilitator through the Missouri Community Action Agency. In a six month period, she led over 400 leaders through this experiential “one-month of poverty”; opening their eyes to the challenges that exist within our community.

Jamison was also recently hired by the Obama Foundation to serve as one of nine community leaders across the nation to train and empower emerging community organizers. During a six-month span, she led 11 teams in developing 11 unique projects that created positive impacts on the community and strengthened the next era of local leaders.

Rania strives to live out the meaning of her name (God’s Purpose in Swahili) by remaining active on several nonprofit boards, linking others to their passions and empowering leaders to strengthen their impact within their communities.

Although she has a lengthy resume, Rania’s most important and rewarding role is being wife to her husband, Theron and mommy to her sons, Lynard (23) and Blaize (6).

Seated in 2016, Councilmember Helen Gym is a longtime educator and community organizer and the first Asian American woman elected to Philadelphia City Council. In her first term, she led a schools agenda that championed the successful end of a state takeover of the Philadelphia school system, passed a tax on soda distributors to fund pre-K, and restored nurses, counselors, music programs and safe drinking water to every public school. She established the city’s first legal defense fund for renters facing eviction and introduced and passed the nation’s most expansive “Fair Workweek” law to give stable schedules and a path to full-time hours for 130,000 part-time workers. She is Vice Chair of Local Progress, a network of progressive municipal electeds, where she leads national efforts to support Sanctuary Cities, affordable housing, and public education. 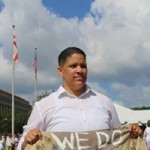 Kerri Evelyn Harris transformed and invigorated the 2018 race for U.S. Senate in the state of Delaware by standing unapologetically for criminal justice reform — emphasizing restorative justice and ending mass incarceration, while also providing economic opportunities for returning citizens. Kerri Evelyn Harris proposed raising the minimum wage to $15 an hour and indexing it to inflation and defended educational access and environmental safeguards, all while fighting against the Bank Lobbyist Bill which weakened Dodd-Frank and has made it easier for communities to experience red-lining and predatory lending. People first is more than an idea for Kerri; it is a personal mandate and core value. Kerri Evelyn Harris believes we should not allow the concept of city, county, or state borders to limit the work of enhancing the lives of ordinary Americans to ensure we all eventually thrive TOGETHER! As a citizen, a leader, an activist, a worker, a mother, a veteran and a queer woman of color woman, Kerri stands for the people of the state of Delaware and all Americans.

Lanae Norwood is an activist, organizer, consultant and blooming social entrepreneur who is passionate about supporting youth and overlooked communities. Lanae is also an expert in community and electoral organizing, youth programs, and social justice. She has consulted on a wide variety of successful digital, communications and field programs in community, volunteer, and voter engagement, youth, issue campaigns, and leadership. Lanae has led organizing efforts in and consulted for campaigns such as #SchoolsNotPrisons, AB 392 (CA Act to Save Lives) #LetUsLive, Voting While Black, Amendment 4 (2018 Florida Second Chances campaign), and Meet Your DA.

As a system impacted youth, the challenges she experienced early in life, have shaped her commitment to improving society, pursuing justice and creating healthy communities for everyone. Her belief in a universal bond of sharing that connects all humanity is Ubuntu, a Nguni Bantu term from South Africa, meaning “humanity”, is often translated as “I am because we are.”

She currently wears many hats at Working Hero Action, primarily leading the field and digital organizing efforts to #EndPoverty.

A. Salewa Ogunmefun (she/her/hers) is a Nigerian-American social justice organizer with a passion for building black political power. With nearly a decade of experience leading and implementing campaigns and field programs in over ten states, Salewa joined the One Pennsylvania team as Political Director in 2016 building with workers to launch the Fair Work Week Campaign in Philadelphia.

As a graduate of Prince George’s County Public Schools, and a former employee of the School District of Philadelphia she is deeply invested in public education that prioritizes children over profits, culminates the family experience, and builds community in Black neighborhoods. A strong belief that unity is strength, an appetite for massive political education, and faith in God drive her everyday. In her free time, she enjoys spirited debates with her nephews (2 and 4 year old grown men), flexing her interior design skills, and anything that challenges her to think differently.

Since joining the One Pennsylvania team Salewa has lead successful field efforts registering over 10,000 new voters across the state, knocking on over 500,000 doors, and signing up over 250 dues paying members of the organization. Under her leadership One Pennsylvania members have worked with allies throughout the state to won victories including a Fair Workweek in Philadelphia for over 130,000 retail, food service, and hospitality workers, a pre-K through 2nd grade suspension ban in Pittsburgh Public Schools, and an increase in operating dollars for labor enforcement in the city of Philadelphia.

As a steward of the movement to pass the Earned Income Tax Credit for low-income families in California, Joe founded CalEITC4Me, one of the state’s largest anti-poverty programs, which has put more than $10 billion back in the pockets of working families. He successfully led the charge to expand eligibility for the program to low-wage, undocumented workers, who had previously been excluded from the tax credit. Then-California Gov. Jerry Brown’s top adviser Nancy McFadden called Joe the “spark” behind the state’s efforts to execute the new program.
He was raised by his mom in Southern California.

Other sessions: A Progressive Vision for 2020 and Beyond

J.D. Scholten was the 2018 Democratic nominee against Rep. Steve King in Iowa’s 4th District. He received nationwide attention for his strong grassroots campaign, falling just 3 points short in a district that Donald Trump won by 27 points in 2016. He grew up in Sioux City. He attended college and played baseball at Morningside College and the University of Nebraska. After college, he played baseball in 7 different countries. He then went on to work as a paralegal before he launched his congressional campaign. Currently, J.D. is the State Director for Working Hero, an antipoverty nonprofit that focuses on raising awareness of the Earned Income Tax Credit.