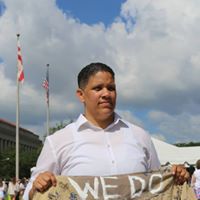 Kerri Evelyn Harris transformed and invigorated the 2018 race for U.S. Senate in the state of Delaware by standing unapologetically for criminal justice reform -- emphasizing restorative justice and ending mass incarceration, while also providing economic opportunities for returning citizens. Kerri Evelyn Harris proposed raising the minimum wage to $15 an hour and indexing it to inflation and defended educational access and environmental safeguards, all while fighting against the Bank Lobbyist Bill which weakened Dodd-Frank and has made it easier for communities to experience red-lining and predatory lending. People first is more than an idea for Kerri; it is a personal mandate and core value. Kerri Evelyn Harris believes we should not allow the concept of city, county, or state borders to limit the work of enhancing the lives of ordinary Americans to ensure we all eventually thrive TOGETHER! As a citizen, a leader, an activist, a worker, a mother, a veteran and a queer woman of color woman, Kerri stands for the people of the state of Delaware and all Americans.