What Others Say About Netroots Nation

What Others Say About Netroots Nation 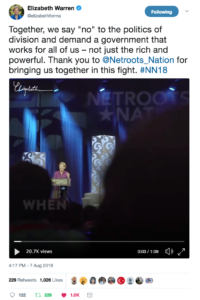 “I always leave Netroots Nation feeling inspired, determined and proud. These fighters helped lead the charge for the CFPB and had my back in the fight for a Senate seat. Now we’re fighting for a government that works for all people—not just the high and mighty.” –Sen. Elizabeth Warren

“I am a huge fan of Netroots. I attended virtually last year and the knowledge, expertise and connections I made were incredible. In my opinion, there is no better training out there.” –Cristina, attendee

“As the annual convention has grown, so has its influence … [T]he progressive movement has become a key voice in the battle for the direction of the Democratic Party—and the selection of its 2020 presidential nominee.” –Philadelphia Inquirer (full story)

“This is a pivotal time for the voices of black queer women to be heard and uplifted. Netroots Nation is THE leading convening on truth, accountability, intersectionality and activism.” –Park, presenter and attendee

“Multiple presidential candidates are talking about Medicare-for-all, reparations for slavery and bold action on climate change … Now, as they gather in Philadelphia for the largest progressive convention of the year, Netroots Nation, they feel empowered as if this is their time to take over the party, push traditional Democrats aside and hold candidates accountable.” –NPR (full story)

‘Netroots Nation leads in digital organizing. The workshops get better and better. I still like the old fashioned blockwalking and canvassing, but digital is here to stay.” —Margaret, attendee

“Netroots Nation is a major stop on the road to the Democratic nomination.” –CNN (full story)

“As we witness transformative changes in American democracy, Netroots Nation becomes more essential than ever as a space to build a new type of politics—a place to challenge ourselves around race, class and gender and a community that holds us accountable to our ideals. I love the fierce energy of policy wonks, activists, journalists, and organizers coming together to figure it all out—even if it’s just for a weekend!” –Philadelphia City Councilmember Helen Gym

“It was a lit occasion for comrades to kick it, build, and plot. Also, for my first (Netroots conference), it felt very easy to engage and navigate. ” –Maurice Mitchell, National Director, Working Families Party

“It is both a great way to get plugged into electoral and campaign work done across the country, learn tactics and skills that would make me a better organizer, and generally just a good opportunity for a new political science grad like me. It’s also virtual, which is an amazing opportunity since I wouldn’t be able to attend in person.” –Shayna, attendee

“Having attended Netroots Nation since its inception, I look forward each year to meeting up with old friends and meeting new ones. Lifelong friendships have been forged over the years, and meeting movement leaders, stalwart icons and rising stars is always a highlight. Sure, there’s plenty of parties, but the real value is in the panels, trainings and keynotes. There is literally never a dull moment! I can’t wait for Netroots Nation 2020 in Denver.” –Vicki Roush, Convey Communications

“Netroots Nation is the best organizing conference for progressives nationwide. I attend every year to learn new tactics, connect with key influencers in the movement, talk about the issues, and share best practices I have learned over the past year. It’s a can’t-miss!” –Laura Packard, presenter and attendee

“Netroots is a powerful, game-changing event. I left feeling energized, empowered, and counting down the days until next year’s event!” –Yann Hatchuel, BerlinRosen

“I’ve attended Netroots Nation in the past and enjoyed not only the workshops and continuing education opportunities that were offered, but also the camaraderie amongst attendees. I’m [happy for] the opportunity to continuing connecting across the progressive ecosystem – even if virtually.’
–Cristelle, attendee

“Attending and volunteering at Netroots Nation (known in our house as progressive summer camp) is always a highlight of my year! It’s the best place to connect with and learn from fellow activists, hear the latest from expert panelists and keynote presenters, and get energized to do the work. Netroots Nation is directly responsible for my moving from simply a concerned citizen to becoming involved with local campaigns and issues!” –Kelly Thome, volunteer

“I love doing my small part for the largest progressive convention in the U.S. There are opportunities to take part in training sessions, learn from expert panelists, and hear from nationally and internationally known speakers who are at the forefront of issues and causes that matter so much.” –Kim Yaman, volunteer

“All the trainings were useful, but the Advanced Email presentation was worth the ticket price by itself. A fantastic three days of issue discussions, in-person networking, and new skills and ideas from the trainings. First-timer but I’ll definitely be back next year.”  –A.P., first-time attendee

“I attended last year and found it so helpful with my activist and advocacy journey. I made so many connections.” –Yolanda, attendee

“Netroots Nation has had such a powerful impact on me (I’ve attended 4 times). It has inspired me to see how I can influence both civic and student leadership structures in my life.” –Steve, attendee (age 19)

“The best part is always the camaraderie. I came into this year’s convention with my battery drained, feeling isolated and depressed. Connecting with my fellow activists, especially those working on issues I don’t encounter every day, was invigorating.” –Netroots Nation 2019 survey response

“Meeting with activists, listening to the incredible work they are doing in the progressive movement and networking to collaborate. As a first time Netroots attendee, this was by far the true value of Netroots for me.” –Netroots Nation 2019 survey response