Aimee Allison is founder and president of She the People, a national network elevating the voice and power of women of color. She brings together voters, organizers, and elected leaders in a movement grounded in values of love, justice, belonging, and democracy. In 2018, Ms. Allison was one of the primary architects of the “year of women of color in politics.”

In April 2019, she convened the first presidential forum for women of color, reaching a quarter of the American population. A democratic innovator and visionary, Ms. Allison leads national efforts to build inclusive, multiracial coalitions led by women of color. She leverages media, research and analysis to increase voter engagement and advocate for racial, economic and gender justice.

Her writing has appeared in the New York Times, The Hill, Essence, Teen Vogue and Newsweek. In the early 1990’s, Ms. Allison earned a rare honorable discharge from the U.S. Army as a conscientious objector and works today to support courageous, moral leadership.

Aimee Allison holds a B.A. and M.A. from Stanford University. Author of Army of None, she has appeared in hundreds of outlets including MSNBC, CNN, the Washington Post, Associated Press and NPR.

She is building a political home for a million women of color, nationally and in battleground states. She was featured in Politico’s 2019 Powerlist. 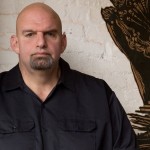 During the last 12 years as mayor, John Fetterman has built the town of Braddock back from economic devastation. He’s applied a hands-on approach to rebuild his community, bringing creative urban policy solutions to Braddock. Whether it’s building community partnerships so that no home in Braddock suffers from heat insecurity, or marrying same-sex couples under protest from the state, John has a proven track record of fighting for the impoverished, the working poor, and the underrepresented. He has always protected communities that are often left abandoned. As Lieutenant Governor, John will make sure all voices of Pennsylvania are heard.

The Honorable Chokwe Antar Lumumba, Esq. is the son of two life-long community activists—the late Mayor Chokwe Lumumba and Nubia Lumumba. Throughout his life and career, he has maintained a consistent presence in community projects and displayed a genuine commitment to justice. Attorney Lumumba began his community work early on—serving as co-director of the Malcolm X Grassroots Day Camp and acting as an assistant coach for the Jackson Panthers Basketball Organization. He received his Bachelor of Arts degree in 2005 from Tuskegee University where he served as president of both the Pi Sigma Alpha Political Science Honor Society and the Tuskegee Political Science Association. As an undergraduate, Attorney Lumumba also represented the institution on a national level as a member of the Tuskegee Bio-Ethics Debate Team and was honored as the 2005 Gwendolyn M. Patton Student Scholar Activist.

Attorney Lumumba earned his juris doctorate and a certificate in sports & entertainment law from Thurgood Marshall School of Law at Texas Southern University in Houston, Texas in 2008. After law school, he immediately returned to Jackson, Mississippi and began his work as a junior associate at Lumumba, Freelon, & Associates. Within a year, he was promoted to managing attorney and took on responsibilities pertaining to personnel and daily operations in addition to his challenging case load. He also litigated criminal and civil cases and represented various sports and entertainment clients for the firm. His dedication to justice and commitment to community is further demonstrated by the numerous pro bono cases he undertook for clientele who struggled to afford legal services yet deserved justice and adequate representation all the same. He is a member of the Mississippi Bar Association as well as the Magnolia Bar Association. In 2013, he launched his own firm—Lumumba & Associates—a firm “Dedicated to Community. Invested in Justice.”

Attorney Lumumba’s deep-seated commitment to his community expands beyond his career.

As a founding member of the Mississippi Human Rights Collective, he co-organized the “Stand Up to Take It Down” rally at the State capitol to support the removal of the confederate insignia from the Mississippi State flag. He currently serves as the media representative of the Coalition for Economic Justice and is an active member of the Malcolm X Grassroots Movement. His talent for organizing has been a vital component to previous city elections. Over the past several years, he has served as the media chairperson for both the Jackson Ward 2 People’s Assembly and the late Mayor Lumumba’s Ward 2 City Councilman campaign. Attorney Lumumba also acted as a campaign coordinator for his father’s successful bid for Mayor in 2013 and was instrumental in co-crafting The People’s Platform.

Evincing his commitment to the progress and development of Jackson, Attorney Lumumba extended his legal services to protect the election of the first black sheriff in Hinds County and, at the request of the late Mayor Lumumba, served on a board organized to respond to the challenges of the Farish Street Development project.

In 2017, Attorney Lumumba defeated nine other viable candidates in the Democratic primary for mayor with a total of 55% of the vote. He went on to win the city’s general election by 93% on June 6, 2017. As Mayor, he has been recognized as one of Mississippi’s Top 50 Most Influential Leaders and was named one of the 100 Most Influential African Americans of 2017 by the Root.

Attorney Lumumba is a faithful member of Free Christian Ministries and serves on the church’s leadership team. His lifelong objective is to continue to struggle on behalf of oppressed peoples worldwide, so that they may eventually obtain the self-determined lives they so justly deserve. He firmly supports the concepts of community and family and the belief of the community as a family and pledges to do all that he can to make that concept live.

Other sessions: Brown Is the New White: 2018 and the New American Majority

Colette Pichon Battle is the founder and Executive Director of the Gulf Coast Center for Law & Policy, whose mission is to promote structural shifts to advance climate justice and ecological equity in communities of color on the frontline of climate change.

She was a lead coordinator for Gulf South Rising 2015 a regional initiative around climate justice and just transition in the South. In addition to developing advocacy initiatives and a suite of trainings on issues that intersect with race, systems of power and ecology, Colette leads the delivery and management of GCCLP’s legal services and maintains a legal specialization in immigration law and disaster law.

In 2018 Colette was awarded with an Honorary Doctorate from Kenyon College in honor of her work over the past two decades. In 2016 Colette was named a White House Champion of Change for Climate Equity and received the Water Champion award from the Greater New Orleans Foundation. In 2015, she was selected as an Echoing Green Climate Fellow. In 2012, Colette was named an “Expert of Color” by the Insight Center for Community Economic Development based on her work to address the US racial wealth divide. In 2007 Colette received recognition from the American Bar Association and in 2008 she was awarded the U.S. Civilian Medal of Honor for the state of Louisiana- both awards were for her work around multiracial, cross regional alliance building in the Katrina recovery.

Ms. Pichon Battle serves on the Board of Directors for the US Climate Action Network (USCAN), the Center for Constitutional Rights (CCR), and Gulf Restoration Network (GRN). Colette serves on the governance council for the Southern Movement Assembly (SMA), is an advisory board member for Communities Responding to Extreme Weather (CREW), Sunrise and is a member of the Experts of Color Network (ECON) working to address racial wealth disparities.

Other sessions: NAFTA and the Midterms: Why We Must Fight to Replace NAFTA, Local Victories Reveal a Path to Climate Equity

Dr. Mustafa Santiago Ali is the Vice President of Environmental Justice, Climate & Community Revitalization for the National Wildlife Federation (NWF), Interim Chief of Programs at the Union of Concerned Scientists and the Founder and CEO of Revitalization Strategies. Before joining the NWF, Mustafa was the Senior Vice President for the Hip Hop Caucus (HHC), a national nonprofit and nonpartisan organization that connects the Hip Hop community to the civic process. Prior to joining the HHC, Mustafa worked 22 years at the EPA and 2 years on Capitol Hill working for Congressman John Conyers chairman of the Judiciary Committee.

Mustafa began working on Social Justice issues at 16 and joined the EPA as a student, becoming a founding member of the EPA’s Office of Environmental Justice (OEJ). He most recently served as Senior Advisor for Environmental Justice and Community Revitalization and Assistant Associate Administrator. He led the Interagency Working Group on Environmental Justice (IWG) which brought together 17 Federal Agencies & Departments and various White House offices to strategically leverage resources to uplift vulnerable communities across the country.

In 2019 Mustafa co-designed and co-moderated the first Presidential forum on Environmental Justice with Amy Goodman. He has interviewed some of America’s most influential leaders in Politics, Hip Hop, Civil Rights, Climate and Social Justice.

Tom Steyer was one of the most successful investors and businessmen in the country. Today, he works full-time to guarantee every family shares the benefits of economic opportunity, education, and a healthy climate. He took on oil companies, corporate interests, and the tobacco industry by co-chairing three successful ballot measures—protecting California’s energy laws, closing a corporate tax loophole to secure greater funding for California public schools, and taxing tobacco to pay for healthcare. Tom is now the President of NextGen America and founder of the Need to Impeach campaign.