Protecting the Vote: Cybersecurity, Misinformation, and the Aftermath of Iowa

Protecting the Vote: Cybersecurity, Misinformation, and the Aftermath of Iowa

The evening of February 3, 2020, and the news of inaccurate results coming in from the Iowa Democratic caucuses struck a chord at the very heart of American democracy. It reverberated through every local, county and state registrar’s office and posed a very important question: Is America ready for voting in the age of the app? From Russian election interference to troll- and bot-infested social media to the debacle in Iowa, the integrity of our elections is on the ballot in 2020. Join chief elected officials, cybersecurity analysts, and experts in online information manipulation for a discussion of what steps can be taken to ensure Americans that they can trust the results of their elections.

Adam extensively represents clients in campaign finance, election law, pay-to-play, and lobbying compliance matters and has been a leader in efforts on behalf of the rights of online speakers His practice today focuses on the representation of a variety of elected officials and candidates for office, as well as corporate, labor, and other politically active entities on federal, state and municipal campaign finance, election law and regulatory compliance matters, including pay-to-play law and the regulation of lobbying activities.

Adam is the former Chairman of the Board of Directors of Netroots Nation. He lives in Philadelphia.

Other sessions: Pub Quiz 2020: It's Been Quite A Year This Week

Secretary Katie Hobbs has led a life of service. Beginning as a volunteer at her church and continuing with her job as a social worker and chief compliance officer at one of the largest domestic violence centers in the U.S., the focus of her life has been to help others to gain security, to be heard, and to create better lives.
That fundamental motivation inspired her to run for Secretary of State, after serving in the Arizona House of Representatives and Arizona Senate as minority leader. Now, she brings her years of experience to the Office of the Secretary of State to ensure that it runs productively, and that Arizona elections are secure, fair and efficient.
Secretary Hobbs has a Bachelor of Social Work from Northern Arizona University and a Master of Social Work from Arizona State University. She has been a professional social worker since 1992. Prior to being elected to the legislature, she worked in the areas of domestic violence, behavioral health, and homelessness.
She has been honored with dozens of awards for her service. Most recently, she was named the AFL-CIO’s Elected Official of the Year (2019). 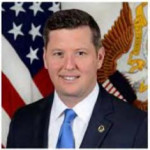 The Honorable Patrick J. Murphy is America’s first Iraq War veteran elected to the U.S. Congress and later served as the 32nd Under Secretary of the Army until January 2017. Secretary Murphy is currently the Distinguished Chair of Innovation at the United States Military Academy at West Point, a Senior Fellow at the Association of the U.S. Army, a media executive, and the Executive Chairman of WorkMerk, an employee engagement company focused on the future of work. He is a graduate of King’s College Army ROTC Program and the Widener University Commonwealth School of Law, where he currently serves as a Trustee. He has two young children, Maggie and Jack, and resides in Pennsylvania.

Alex Padilla was sworn in as California Secretary of State on January 5, 2015 becoming the first-ever Latino elected to the position. He is committed to modernizing the office, increasing voter registration and participation, and strengthening voting rights. A national leader on protecting voter privacy, Secretary Padilla was the first secretary of state to refuse the White House’s unprecedented request to obtain the personal data of every voter through its troubled Presidential Advisory Commission on Election Integrity. Believing the Commission’s efforts were a pretext to enacting voter suppression measures, the Secretary challenged the Commission’s agenda and appointees, many of whom had well-documented histories of supporting restrict voting policies that make it harder for eligible Americans to vote. Several secretaries of state agreed and advocates sued. The commission was disbanded in 2018.

In 2016, Secretary Padilla oversaw the state’s historic General Election. Working with statewide partners, the Secretary helped add upwards of one million registered voters to the rolls. More than 19.4 million Californians were registered and more than 14.6 million cast ballots on Election Day – both state records.

To expand voting rights to more Californians, in 2015, the Secretary sponsored legislation to establish vote centers, expand early voting and implement same-day conditional voter registration through the Voter’s Choice Act. He also sponsored the New Motor Voter Act which will eventually register to vote every eligible California citizen who goes to a DMV office to get a driver’s license or renew one, potentially registering millions.

Other sessions: Disinformation in the 2020 Campaign: Who's Behind It? (It's Not Just Russia)