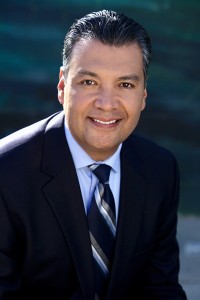 Alex Padilla was sworn in as California Secretary of State on January 5, 2015 becoming the first-ever Latino elected to the position. He is committed to modernizing the office, increasing voter registration and participation, and strengthening voting rights. A national leader on protecting voter privacy, Secretary Padilla was the first secretary of state to refuse the White House’s unprecedented request to obtain the personal data of every voter through its troubled Presidential Advisory Commission on Election Integrity. Believing the Commission’s efforts were a pretext to enacting voter suppression measures, the Secretary challenged the Commission's agenda and appointees, many of whom had well-documented histories of supporting restrict voting policies that make it harder for eligible Americans to vote. Several secretaries of state agreed and advocates sued. The commission was disbanded in 2018. In 2016, Secretary Padilla oversaw the state’s historic General Election. Working with statewide partners, the Secretary helped add upwards of one million registered voters to the rolls. More than 19.4 million Californians were registered and more than 14.6 million cast ballots on Election Day - both state records. To expand voting rights to more Californians, in 2015, the Secretary sponsored legislation to establish vote centers, expand early voting and implement same-day conditional voter registration through the Voter’s Choice Act. He also sponsored the New Motor Voter Act which will eventually register to vote every eligible California citizen who goes to a DMV office to get a driver’s license or renew one, potentially registering millions.