Democracy Rising: How Florida Took on Felony Disenfranchisement and Won!

Democracy Rising: How Florida Took on Felony Disenfranchisement and Won!

In a historic mid-term election in 2018, Florida residents voted in favor of state constitutional Amendment 4, which automatically restores voting rights to 1.6 million people with prior felony convictions. The ballot initiative received support from over 60% of Florida voters. The work now becomes moving those previously disenfranchised onto the voting rolls through voter education, engagement and registration. Participants of this panel will hear lessons learned from the Florida engagement table that accomplished the feat, and explore organizing strategies other states challenging felony disenfranchisement can employ ahead of the 2020 election. 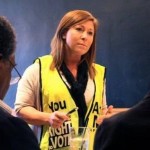 Denise Lieberman, a nationally recognized expert on voting rights, is Director of the Power & Democracy Program at Advancement Project, a racial justice organization based in Washington DC. A seasoned constitutional and civil rights lawyer, Lieberman has been at the forefront of voting rights debates in her home state of Missouri and across the country.

As Director of Advancement Project’s Power & Democracy Program, Denise oversees the organization’s Voter Protection and Right to Vote initiatives. She has litigated challenges to discriminatory Photo ID laws in Missouri, Pennsylvania, Wisconsin and North Carolina, where she was counsel to the NAAACP in a challenge to the state’s “monster” voter suppression law that the court found targeted African Americans “with almost surgical precision.”

Denise has worked with grass roots partners to address the collateral consequences of mass incarceration, working to advance rights restoration campaigns in Florida and Virginia. She recently served as counsel to VOTE (Voice of the Experienced) in an appeal to restore voting rights to tens of thousands of Louisiana citizens who are on probation or parole.

State Senator Dwight M. Bullard hails from an esteemed educator, community activist and legislator family. His mother, Larcenia J. Bullard is a former school teacher, administrator, education consultant and member of the Florida House of Representatives from 1992-2000. She was later elected to the Florida Senate in 2002 and has continued to serve since. His father Edward B. Bullard is a former educator, assistant principal, and former member of the Florida House of Representatives from 2000-2008. In 1981, Dwight moved to Miami, where he was raised in the community of Richmond Heights. After graduating from Miami Killian Sr. High, he continued his education at Florida A&M University where he received his B.S. in History Education. From 2000 to 2017, Sen. Bullard was a teacher at Coral Reef Senior High School and in 2008 he was sworn into office as representative of District 118 and was reelected subsequently. He served as a member of the Agriculture & Natural resources policy committee, the Prek-12 appropriations committee, Prek-12 education policy committee and several others. At the time, then Representative Bullard was named Democratic ranking member of the PreK-12 education policy committee after his first term and became Democratic ranking member of the education committee subsequently. In 2012 Senator Bullard was elected to the Florida Senate where he served as Vice Chair of the Transportation and Agriculture committees and maintained membership on Education and several other committees. In his time in the Senate, Bullard worked to stop online bullying, bring tuition equity to aspiring citizens and raise the minimum wage. Bullard served in the Florida Senate until 2016.
His extensive and remarkable role in political and educational leadership has granted him tremendous recognition; Bullard was a recipient of the Florida Education Association’s Freshman Friend of Public Education Award and Friend of Education Award, and the Florida Association of School Administrators’ Next Generation Leader Award and the Young Elected Officials Barbara Jordan Leadership Award. Senator Bullard is also affiliated with the Miami-Dade Democrats where he has served as Chair and was awarded the Miami-Dade Young Democrats Outstanding Leadership Award. He retains membership in the Democrats of South Dade Club, the Ron Brown Democratic Caucus, 100 Black Men of South Florida, as well as, the J. L. King Prince Hall Masonic Lodge and the Richmond-Perrine Alumni Chapter of the Kappa Alpha Psi Fraternity, Incorporated.
In 2017 Bullard was hired as the Political Director of the New Florida Majority. In this capacity he works to bring political education and awareness to underserved and often marginalized communities. He also works to push policy to positively impact those same communities. His work now much like his previous roles looks to uplift people in a way that makes them the masters of their own destiny. He continues to simply amplify the voice of those often unheard.

Other sessions: How Primaries Build Power and Transform What is Possible

Other sessions: Fighting ALEC's Control of Lawmaking is a Fight Against Racism