The Ethics of Storytelling

The Ethics of Storytelling

Sharing stories can strengthen personal bonds, help people feel less alone, and generate social respect for a range of experiences. But sharing stories can also come with great personal and professional risks. In today’s fast moving media, some personal stories get co-opted and moved away from the storysharer being at the center of the storytelling process. How do we navigate sharing personal stories, which are so intrinsic to culture change, with the complexities of media landscape? This panel will discuss ethical storysharing and advocacy from real, lived experiences of those working at the forefront of culture change in underrepresented, sometimes stigmatized groups.

Ronak Davé Okoye is Vice President of the Board of Directors of Exhale, an organization elevating personal story to create culture change around the highly stigmatized and politicized issue of abortion. As a 2012 Pro-Voice Fellow, Ronak traveled the nation engaging audiences on college campuses, churches, and community centers as a personal abortion story sharer and Pro-Voice facilitator. Her personal abortion story has appeared in Cosmopolitan, Hyphen Magazine, NPR, and other local and national media outlets. Ronak is an urban planning and policymaker and works to enable equitable, healthy, and sustainable communities in Greater Boston and the Bay Area. 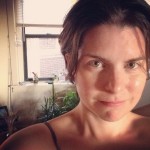 Anna Clark is an independent journalist living in Detroit. Her writing has appeared in The New Republic, NBC News, POLITICO Magazine, Pacific Standard, The Guardian, The American Prospect, Salon, TGrantland, The Christian Science Monitor, The Boston Review, and other publications. She is a political media correspondent for the Columbia Journalism Review. Anna is a former Fulbright Fellow in Kenya,. In 2012, she founded Literary Detroit. Anna is also a writer-in-residence in Detroit high schools through the InsideOut Literary Arts Project, and on Thursdays, she facilitates a theater workshop at a men’s prison in Macomb County, Michigan. She graduated from the University of Michigan and Warren Wilson College’s MFA Program for Writers. Anna is a founding board member of Write A House and she edited “A Detroit Anthology,” published in summer 2014

Zerlina Maxwell is a political analyst and contributing writer for EBONY.com, theGrio.com, and Feministing.com. She writes about national politics, candidates, and specific policy and culture issues including domestic violence, sexual assault, victim blaming and gender inequality. She has consulted with the United States Department of State to promote the use of social media by students in the West Bank. Her writing has also appeared in JET Magazine, on CNN.com, The Huffington Post, The American Prospect, TheRoot.com Salon.com, and RawStory.com. She is also a frequent guest on Make It Plain with Mark Thompson on Sirius XM Left and on Fox News.

Other sessions: Reclaiming the Promise of Public Education, Daring to Internet While Female

Shaka Senghor is a writer, mentor and motivational speaker whose story of redemption has inspired youth and young adults at high schools, universities, and conferences across the nation. He is founder of The Atonement Project, a recipient of the 2012 Black Male Engage-
ment (BMe) Leadership Award, a 2013 MIT Media Lab Director’s Fellow, and a Fellow in the inaugural class of the W.K. Kellogg Foundation’s Community Leadership Network. He also teaches a course on The Atonement Project at The University of Michigan in Ann Arbor. To
date, Shaka recently did a talk on the main stage at the 30th Anniversary TED Conference in Vancover, British Columbia.

Kassi Underwood is a writer whose work has appeared in The New York Times, The Atlantic online, The Rumpus, Guernica, Exhale’s Pro-Voice Blog, and elsewhere. She received Exhale’s 2012 Pro-Voice Storyteller Award, along with multiple fellowships from Columbia University, where she earned her M.F.A. in literary nonfiction and taught gender studies in the Undergraduate Writing Program.

As an Exhale Pro-Voice Fellow, Kassi shared her abortion story and taught Pro-Voice 101 at colleges, churches, and theaters across the country. She continues to speak nationwide and has been featured in New York Magazine and Upworthy.com. She has appeared as a guest on MSNBC’s “Melissa Harris-Perry Show,” HuffPost Live, and Fusion’s Alicia Menendez Tonight.

Kassi hosts The Freerange Nonfiction Reading Series in Manhattan’s Lower East Side and lives near Boston, where she is working on her first book.