Join us for an engaging discussion on issues around student debt. We plan to focus on three core issues:
1. The existing 1.2 trillion dollars of student debt
2. College affordability and accessibility
3. The role of wall street in our lending system

In particular we encourage those attendees with student loans and those who are concerned with the impact of student loan debt on our economy to attend this caucus. We’ll seek to come away with some tangible steps on two key questions:
1. Engaging & building power in the 40 million: How do we organize and engage student loan borrowers to take action?
2. Engaging a broader population of supporters: How do we alert our citizens that student debt affects us all with or without holding the actual debt yourself.

Since 2009, Natalia has been an advocate and leader for the national student debt crisis. She co-founded Student Debt Crisis in 2012. Her work has given Natalia the opportunity to connect personally with student loan borrowers and focus on driving policy solutions through online campaigning. The goal is to turn student debt and affordable education into a winning electoral issue.

In 2011, she started Occupy Colleges as a response to the economic injustices students were dealing with from high tuition increases to lack of financial aid. During her tenure at Occupy Colleges, Natalia organized one of the largest college protest since the 1970’s.

Ask Natalia about how to tackle your student debt!

Other sessions: Student Debt and Wall Street: How Finance is Taking a Growing Share of Higher Education Spending and What We Can Do About It, Headline Risk and Social Cost: Hitting the 1% Where it Hurts, From Underdog to Top Dog: Organizing for Impact While Small and Mighty 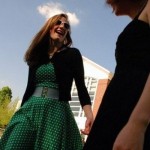 A Wisconsin native, Maggie Thompson is the Campaign Manager for the Higher Ed Not Debt campaign, a nationwide multiyear effort working to ensure that a quality higher education is affordable and accessible to all without the burden of financial hardship. Prior to joining Generation Progress, Maggie worked on key progressive priorities including bringing non-traditional voices to the climate change fight, implementing the Affordable Care Act, and overseeing numerous issue campaigns across the Midwest, including “The Action,” the successful campaign to avert the fiscal cliff by ending the Bush tax cuts for the wealthiest. Maggie served in the Obama administration at the White House Council on Environmental Quality and in the Office of the Director at U.S. Citizenship and Immigration Services. She also worked for then-Sen. Barack Obama starting in 2007 during the Nevada primaries and was a regional field director for the 2008 Obama for America campaign.