Fri 10:15am: What It Takes: What 2020 Candidates Can Learn from Local Struggles to End Mass Incarceration

Over the last five years, America has seen a massive pushback against the harsh, incarcerative policies of recent decades that have sent more than 2 million people to jail and prison and placed 4.5 million people under community supervision and surveillance. Led by grassroots activists, public defenders, those impacted by harm and violence and decades in prison, and even some elected prosecutors, communities have come together to recognize that incarceration is not always—or even often—the answer to protect our communities, that the war on drugs failed, and that we must give people a chance to grow and change. Philadelphia has been at the forefront in changing how we think about safety, dignity, and justice, with other cities following suit.

This panel will discuss The Justice Collaborative’s “Blueprint for a Safer and More Just America,” which includes seven pillars of criminal justice reform that progressive candidates must embrace. We’ll zoom in on how local criminal justice actors have worked on each of these issues to make their city more safe and fair and less punitive, especially to Black, Brown, immigrant, and poor community members. And then we’ll zoom out to discuss the lessons the Democratic party and 2020 candidates should learn as they discuss the changes this country must make to ensure that dignity is offered to all. 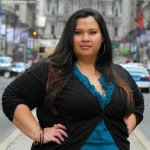 Erika Almiron is a lifelong activist and organizer and has been working on issues from immigrants rights to criminal justice reform for 20 years. She is the oldest of four siblings and the daughter of Paraguayan immigrants who own a small business and are domestic workers. Erika first became an organizer while working as a waitress in college. One day management tried to withhold pay from her and her co-workers and she organized the entire staff to walkout, forcing management to pay.
​
After college, Erika worked at Planned Parenthood as a counselor and translator, helping women access healthcare and went on to work at the American Friends Service Committee, where she played a vital role in supporting women organizing in the factories at the US/Mexico border.
​
As Assistant Director of the Philadelphia Student Union, Erika supported Philadelphia Public school students in their efforts to secure adequate school funding from the state, improve school climate and push back against the criminalization of young people. She also served as a mentor to students, many of whom she mentors to this day.
​
Erika most recently served as the Executive Director of Juntos. Her work focused on a commitment to redefining what a successful sanctuary city looks like, challenging harmful and unfair ICE policies and practices and eliminating the over policing of migrants and people of color. Erika’s leadership resulted in Philadelphia ending its cooperation with ICE, making Philadelphia a national model for Sanctuary Cities.
​
Both locally and nationally Erika has pushed the Immigrant Rights Movement to build coalitions with all people unjustly affected by the criminal justice system, primarily black and brown people, the LGBTQIA community and poor folks.

Most recently Erika ran for City Council at Large in Philadelphia with the most progressive policy platform and vision than any other candidate, guided by her years of work in social justice and experience in fighting successfully for the people. While she did not win, she built a wildly successful campaign that garnered tens of thousands of votes across the city unified in a vision that prioritizes the needs of the people who need it the most and who have built our city.

Robert Saleem Holbrook (he/him) is the Executive Director of the Abolitionist Law Center, a law project dedicated to ending race and class based discrimination in the criminal justice system and all forms of state violence. Prior to being named Executive Director of ALC he was its Director of Community Organizing responsible for expanding ALC into Philadelphia. He also led ALC’s campaigns against Death By Incarceration (Life Without Parole), Solitary Confinement and State Violence. He has worked with the Center for Constitutional Rights to end Death By Incarceration sentences in the United States and the National Unlock The Box Campaign to End Solitary Confinement. He is a co-founder of the Human Rights Coalition, an organization with chapters in Philadelphia and Pittsburgh that is composed of family members of prisoners. HRC advocates on behalf of the civil and human rights of prisoners. He is also a co-founder of the Coalition to Abolish Death By Incarceration in Pennsylvania, an advocacy group fighting to end Life without Parole Sentences. He sits on the advisory boards of the Amistad Law Project and Youth Arts and Empowerment Project. While incarcerated, Saleem wrote extensively on prison abuse, social injustice, state violence and juveniles charged and sentenced as adults. His writings were featured in Truthout, The Appeal, San Francisco Bay View, and Solitary Watch. He was released from prison in 2018 after spending over two decades incarcerated for an offense he was convicted of as a child offender.

Lawrence S. Krasner was officially sworn in on January 2, 2017, as the City of Philadelphia’s 26th District Attorney. Before being elected District Attorney, Mr. Krasner served of-counsel at Greenblatt, Pierce, Funt, and Flores, LLC. Larry was born in 1961 in St. Louis, the son of a World War II veteran and author father and evangelist mother. After attending public schools in St. Louis and the Philadelphia area, Larry earned degrees from the University of Chicago and Stanford Law School with the help of student loans and scholarships.

Mr. Krasner attended public school in the St. Louis and Philadelphia areas. He received his undergraduate degree at the University of Chicago in 1983 and his law degree from Stanford Law School in 1987, where he was selected to the Stanford Law Review. After multiple offers of employment in prosecutors’ and public defenders’ offices throughout the country, he worked as a public defender in Philadelphia from ’87 – ’91 and was then promoted to the Federal Public Defender’s Office in Philadelphia (’91- ’93). In 1993 he started his own private practice, specializing in criminal defense and police misconduct matters. He has remained in private practice ever since. During that time, Mr. Krasner has tried thousands of bench and jury trials in criminal and civil court in the Philadelphia area as well as other counties and states.

Throughout his 30 year career, Mr. Krasner has also proudly demonstrated a steadfast commitment to social justice, having defended protesters pro bono who were involved with movements including ACT UP, Black Lives Matter, progressive clergy with POWER, Casino-Free Philadelphia, DACA Dreamers, Decarcerate PA, anti-gun clergy with Heeding God’s Call, anti-poverty and homelessness advocates with Kensington Welfare Rights Union, Occupy Philly and Reclaim Philadelphia, and Grannies for Peace, among many others.

He has resided in Philadelphia for over 30 years with his wife of 28 years. His wife has been a judge of the Court of Common Pleas for 17 years. They have two adult sons.

Other sessions: After Cash Bail