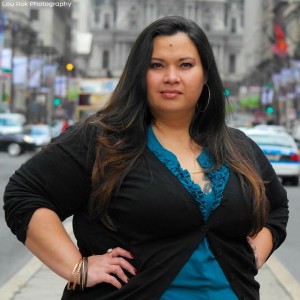 Erika Almiron is a lifelong activist and organizer and has been working on issues from immigrants rights to criminal justice reform for 20 years. She is the oldest of four siblings and the daughter of Paraguayan immigrants who own a small business and are domestic workers. Erika first became an organizer while working as a waitress in college. One day management tried to withhold pay from her and her co-workers and she organized the entire staff to walkout, forcing management to pay. ​ After college, Erika worked at Planned Parenthood as a counselor and translator, helping women access healthcare and went on to work at the American Friends Service Committee, where she played a vital role in supporting women organizing in the factories at the US/Mexico border. ​ As Assistant Director of the Philadelphia Student Union, Erika supported Philadelphia Public school students in their efforts to secure adequate school funding from the state, improve school climate and push back against the criminalization of young people. She also served as a mentor to students, many of whom she mentors to this day. ​ Erika most recently served as the Executive Director of Juntos. Her work focused on a commitment to redefining what a successful sanctuary city looks like, challenging harmful and unfair ICE policies and practices and eliminating the over policing of migrants and people of color. Erika’s leadership resulted in Philadelphia ending its cooperation with ICE, making Philadelphia a national model for Sanctuary Cities. ​ Both locally and nationally Erika has pushed the Immigrant Rights Movement to build coalitions with all people unjustly affected by the criminal justice system, primarily black and brown people, the LGBTQIA community and poor folks. Most recently Erika ran for City Council at Large in Philadelphia with the most progressive policy platform and vision than any other candidate, guided by her years of work in social justice and experience in fighting successfully for the people. While she did not win, she built a wildly successful campaign that garnered tens of thousands of votes across the city unified in a vision that prioritizes the needs of the people who need it the most and who have built our city.