Sanctuary Cities: From the Dirty Wars to the War against Immigrants and Black Bodies

Sanctuary Cities: From the Dirty Wars to the War against Immigrants and Black Bodies 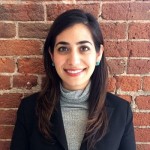 Elica received her B.A. from UC Irvine and Sciences Po, Paris. She received her J.D from UC Davis School of Law, where she was active in the Immigration Law Clinic, Middle Eastern South Asian Law Student Association, and was a UC Human Rights Fellow at the Center for Constitutional Rights. Elica is an alum of the Rockwood Leadership Institute and a 2015-2016 German Marshall Memorial Fellow. She is also the current President of the Iranian American Bar Association Northern California Chapter

Avideh Moussavian’s advocacy at NILC focuses on reducing the vulnerability of low-income immigrants to deportation on account of their race, class, or gender. She has previously worked on immigration reform advocacy and state and local enforcement issues at the New York Immigration Coalition and directly represented immigrant victims of gender-based violence at Sanctuary for Families in New York City, including those in detention. She has served on the board of Families for Freedom, an anti-deportation community organizing network in New York City, and as a visiting professional with the Office of Public Counsel for Defense at the International Criminal Court. She holds a juris doctor from Boston University School of Law and a bachelor of arts from Columbia University.

Other sessions: Moving Forward: Repealing the Muslim Ban for Good

Blanca Pacheco is the New Sanctuary Movement of Philadelphia’s Co-Director
She is originally from Ecuador and has lived in Philadelphia for 20 years. She is a passionate community organizer and has been working with the immigrant community since 2006, first as the Program Coordinator at Open Borders Project where she taught computer classes and coordinated the education program. Blanca was a founding member of NSM. As a member, she helped create Know Your Rights trainings, the storytelling project, and attended New Leadership School. She soon joined the Board and in 2012 came on as a community organizer with NSM. She was part of the successful campaign to stop collaboration between Philadelphia Police and ICE, and has helped grow the organization over the last 10 years. In 2010, she was honored with the Bread and Roses Emerging Leader Award.

Azadeh Shahshahani is Legal & Advoacy Director at Project South. Azadeh has worked for a number of years in the U.S. South to protect and defend immigrants and Muslim, Middle Eastern, and South Asian communities. She previously served as president of the National Lawyers Guild and as National Security/Immigrants’ Rights Project Director with the ACLU of Georgia. Azadeh serves on the Advisory Council of the American Association of Jurists and on the Board of Directors of Defending Rights and Dissent. Azadeh has served as a trial monitor in Turkey, an election monitor in Venezuela and Honduras, and as a member of the jury in people’s tribunals on Mexico, the Philippines, and Brazil. She has also participated in international fact-finding delegations to post-revolutionary Tunisia and Egypt as well as a delegation focused on the situation of Palestinian political prisoners. She is the author or editor of several human rights reports, including a 2017 report titled “Imprisoned Justice: Inside Two Georgia Immigrant Detention Centers,” as well as law review articles and book chapters focused on racial profiling, immigrants’ rights, and surveillance of Muslim-Americans. Her writings have appeared in the Guardian, the Nation, MSNBC, USA Today, Aljazeera, and HuffPost, among others. Azadeh received her JD from the University of Michigan Law School where she was Article Editor for The Michigan Journal of International Law. She also has a Master’s in Modern Middle Eastern and North African Studies from the University of Michigan. Azadeh is the recipient of the Shanara M. Gilbert Human Rights Award from the Society of American Law Teachers, the National Lawyers Guild Ernie Goodman Award, the Emory Law School Outstanding Leadership in the Public Interest Award, the Emory University MLK Jr. Community Service Award, the US Human Rights Network Human Rights Movement Builder Award, the American Immigration Lawyers Association Advocacy Award, the Distinguished Leader Award from the Fulton County Daily Report, and the University of Georgia Law School Equal Justice Foundation Public Interest Practitioner Award, among several others. She has also been recognized as an Abolitionist by the Antiracist Research and Policy Center at American University & the Frederick Douglass Family Initiatives, and as one of Atlanta’s 500 Most Powerful Leaders by Atlanta Magazine. In 2016, Azadeh was chosen by the Mundo Hispanico Newspaper as an Outstanding Person of the Year for defending the rights of immigrants in Georgia. In 2017, she was chosen by Georgia Trend Magazine as one of the 40 under 40 notable Georgians.