We Have Important Work to Do in Phoenix

We Have Important Work to Do in Phoenix 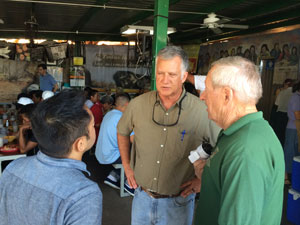 Board Chairs Arshad Hasan and Patrick O’Heffernan
speak with the director of the Kino Border Initiative.

For the last several months we’ve been working with our 2015 host committee to figure out how NN15 might look different from previous conventions. We’re excited to introduce these organizers and organizations to you in the coming months, as they’re doing heroic work every day often at great personal risk to themselves. The individuals and organizations we’re working with have built progressive infrastructure that mostly didn’t exist during the last presidential cycle, and they’ll share their stories with you next summer. The lessons they’ve learned will benefit activists around the country—from the bluest enclave to the deepest red territory. And we’re going to do what we can to leave infrastructure behind even after the conference is over, by connecting locals with other organizers from around the country and by providing technology and resources wherever possible. We’ll be rolling out more details in the coming weeks and months.

Earlier this month, we were invited to take a tour through Tucson and the border region including Nogales, Sonora, to get a firsthand look at some of our country’s immigration policies and how they impact families in Arizona. These experiences—along with other tours we’ve planned for the coming months—will serve as a guide for how our programming develops this year. One thing we learned is that we have an obligation to do some truth-telling about the effects of these policies. 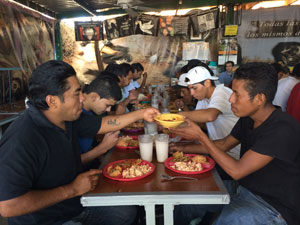 After the experience of this trip, it’s hard for me to listen to the way immigration gets discussed in DC circles. It’s clinical, wonky, more concerned with political gamesmanship than helping families, and fundamentally normalizes some really unjust and horrifying practices that may have had roots in Arizona but have spread to cities across America. And one month after the murder of Mike Brown in Ferguson, I’m haunted by the connections between the creeping militarization of the border and the creeping militarization of our local law enforcement. Maybe there’s a combined movement that could be catalyzed to stop both.

When you get to Tucson and parts further south approaching the border, you feel more like you’re in a war zone than in America. There are towers with ground-sensing technology, a highly visible law enforcement presence, helicopters carrying men with automatic weapons, drones hovering above and checkpoints with dogs and more armed officers. Those fighting for existing CIR bills have largely accepted these things as not only the necessary reality, but something which should be increased. 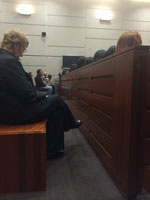 Probably the worst thing we saw on our trip was the perversion of justice known as Operation Streamline. It exists in exactly two federal courts right now, one in Tucson and one in Del Rio, TX. I won’t do this justice with words, but I’ll try to paint the picture of what we saw.

Five days a week, for the past 7 years, 50-70 people in full shackles march into a courtroom in Tucson. Ten to 15 “defense attorneys” who spend about two minutes explaining to these immigrants how they should answer the judge’s questions are also present. Shackled immigrants are marched to the front of the room five at a time, where they’re asked to confirm their name, the date and location they entered the U.S. and that they didn’t enter with permission. They’re then asked to plead guilty. There’s no evidence presented and no opportunity for debate, so out of fear all of them plead guilty because they’ve been told to do so. The judge arbitrarily hands out sentences ranging from one to six months of jail time. They’re dismissed—now with a criminal record—and the next five file up.

The attorneys in this room are each paid roughly $500 a head for their services, and the private correctional facilities these men and women are heading to all cash in on their sentences. We estimated that in just one day about $800,000 worth of sentences were handed out to those facilities. Those processed through Operation Streamline are monetized for private gain to the tune of about $11 million a month into the hands of private correctional facilities.

The CIR bills that have gone through DC call for tripling funding to this program. And when people call for Obama to take executive action, this is the kind of thing that’s directly within his power to stop. That’s one of many reasons local activists are frustrated with what’s going on in DC.

What happens in Arizona doesn’t stay in Arizona. And worse, each new wave of unjust policies numbs us to the last.

It’s time for progressives to shine a light on places some in our government would prefer you didn’t look.

This is the first in a series of posts on the realities of what immigrants and people of color in Arizona face every day.