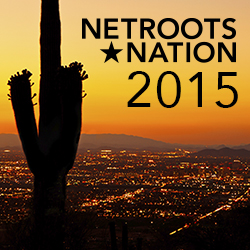 We know there are some who are concerned with our decision to go to Phoenix next year. Some are even considering staying home. Even though we don’t always agree, we are progressives and we value and love every member of our community and respect their points of views. Our family value is every member of our family has value.

We’re already reaching out to locals and those working on this issue.

Cristina Jimenez from United We Dream supports our decision:

“I am very, very excited that Netroots has chosen Phoenix as the location for next year. United We Dream actually held our national congress earlier this year in February and we went to Phoenix … because that’s one of the key places in the country where our communities have been targeted. And we were there with over 500 DREAMers from all over the country asking and demanding that Governor Brewer issues drivers licenses for DREAMers.”

We want everyone aspiring for office in 2016 — from the President to Congress to local offices – to know that if you don’t support taking real action on immigration reform, you won’t win our community’s support.

Our community has already made an impact in Detroit by making our voices heard and amplifying the work of those on the ground. We brought not only our organizing strength, but national media attention to the water crisis here. We’ve heard from countless local activists that our partnership and presence has made a big difference.