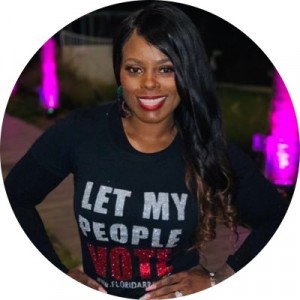 Sheena Meade is a former teenage mother who overcame many obstacles to eventually running for an elected office and playing a key role in arguably the most transformative electoral victory in the history of the State of Florida, to now being a Donor Advisor to a major national Funder. A mother, activist, strategist, and advisor, Sheena’s experience with various state and national organizations brings to bear an enormous wealth of personal and professional experience to tackle the most pressing issues facing marginalized communities and women; particularly in the areas of criminal justice reform and voting rights. Sheena started her life as an activist at the young age of 13 when she helped to prepare sandwiches for participants at the 100 Men March in D.C. in 2005. Born into a family of labor organizers, she soon found herself working for SEIU in South Carolina where she quickly became the State Director of a campaign tasked with organizing people around the Affordable Care Act. Her success at organizing over 200 churches, HBCU’s, and communities which resulted in the South Carolina Legislature passing a resolution supporting healthcare reform created the opportunity for Sheena to work for the AFL-CIO. While at the Florida AFL-CIO she founded the Florida Young Workers, organized the first statewide predictive dialer phone bank in the history of Florida, and played key roles in many Labor Coordinated Campaigns Most recently, while simultaneously serving as the Director of Strategic Partnerships and Special Projects as well as Director of Organizing for the FRRC, Sheena oversaw what is believed to be the largest statewide engagement and mobilization of religious institutions this country has ever seen when over 800 congregations of faith supported Amendment 4 efforts. Sheena’s uncanny ability to effortlessly navigate between the various levels of communities. She’s married to fellow activist Desmond Meade and they have 5 beautiful children.