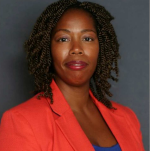 Mũthoni Wambu Kraal is the National Political & Organizing Director at the Democratic National Committee. In this role, she directs the electoral and organizing strategy as well as investments of the party committee. She has been in progressive politics for over two decades and is well-accustomed to the warp speed of grassroots organizing. As the DNC National Political and Organizing Director, she leads a top-notch team of strategists. She is part of an intergenerational team that values diversity and the strength it’s bringing to the work. Mũthoni along with her team, is dedicated to working in every state to elect Democrats up and down the ballot and to build the power of our communities in the party. Previously, she served as the Vice President of National Outreach and Training at EMILY's List, where she oversaw their training programs, and created strategic partnerships with the progressive community and beyond. It was during 2 cycles at the Democratic Congressional Campaign Committee raising money for candidates and Congressional incumbents in tough races that she learned about the world of campaigns and the important role fundraising plays in winning campaigns. She also saw up close that some of the most underrepresented groups in Congress—women and people of color—weren’t keeping up with the growing influence of money in elections. In addition, Wambu Kraal co-opened and ran a woman-owned fundraising firm that serviced clients at every level of political office. She served as the PAC Coordinator for the AFL-CIO, and served as the deputy political director for then-U.S. Senator Joe Biden. In 2008, she was the deputy campaign manager and political director for Senator Kay Hagan’s successful race against Senator Elizabeth Dole in North Carolina. Wambu Kraal was born in Chicago and spent her formative childhood years in New York City. Raised by two passionate educators who met because of their community activism, she attributes her dedicated interest in politics to parental osmosis. This includes the subtle fact that she could hold protest signs before she could walk. A graduate of Howard University where she earned a B.A. in journalism. Wambu Kraal is a member of Delta Sigma Theta Sorority, Incorporated and a lifetime member of the American Council of Young Political Leaders. She resides in Washington, DC with her husband John Peter and their young son Mirii. The boy is subject to the same parental osmosis as she was growing up. He’s been standing with women before he could physically stand.