Climate disinformation reduces our ability to pass climate policy, and we aren’t doing nearly enough to stop climate disinformation from spreading. It is no exaggeration to say we have recently witnessed both the worst climate disinformation and the greatest opportunities to stop it. Using research and case studies from 2021 (Texas power outage, Biden’s April climate plan, and the COP26 conference), this panel will present the challenges disinformation poses the climate movement. We’ll build an evidence base for stronger corporate policies, broader regulation, and transparency. Finally, panelists will discuss the regulatory and legislative paths available to fight climate disinformation head-on.

Other sessions: On (and Off) the Media: How the Press Can Save or Sink Democracy 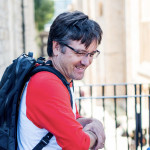 Michael Khoo (he/his) is the Co-chair of the Climate Disinformation Coalition at Friends of the Earth where he works with their communications and climate change departments.

Khoo is also Co-CEO of Upshift Strategies and coordinated the 2014-2015 national Net Neutrality campaign, a large-scale coalition campaign that overcame the entrenched Washington telecommunications industry. Previous to that, he was the Washington representative for the Union of Concerned Scientists, and lead campaigner for Greenpeace Canada. Khoo (he/his) is ethnically/geographically Malaysian-Canadian and resides in Washington, D.C.

He published network analysis research about the marriage of climate deniers and QAnon here:
https://foe-us.medium.com/climate-clicks-capitalism-and-crazies-a336640b47d

Phil Newell leads opposition research and rapid response work at Climate Nexus, where since 2011 he’s worked to expose, debunk and deplatform the climate disinformation coming from the fossil fuel industry and its propagandists.

His daily reporting on climate disinformation can be found @ClimateDenierRoundup at the Daily Kos, or you can get it direct in your inbox, along with all the newest climate news, by signing up for Hot News: https://climatenexus.org/hot-news/

Sheldon Whitehouse represents Rhode Island in U.S. Senate, where he has earned a reputation as a fierce advocate for progressive values and a thoughtful legislator capable of reaching bipartisan solutions. He has been at the center of efforts to rebuild our nation’s infrastructure, reform the criminal and juvenile justice systems, protect Americans from toxic chemicals in everyday products, address ocean plastic waste, and respond to the opioid crisis. Whitehouse co-founded the Senate Climate Action Task Force to build support for action to address carbon pollution, and sits on Senate Democrats’ Special Committee on the Climate Crisis.