Indigenous people and the special places they hold sacred have come under threat and destruction from global resource extraction industries in a “Green New Deal” response to climate change. With the conflict at the Apaches’ sacred Chi’chil Bildagoteel (“Oak Flat”) caused by mining giants Rio Tinto and BHP’s proposed copper mine there, the panelists will explain how universal moral and ethical tenets and traditional Indigenous ecological and cultural knowledge should guide people, governments, and corporation boards in developing honest socially responsible solutions to the challenges of the climate change problem.

I was born in Denver, completed graduate studies at the University of Arizona, and educated in community advocacy and relationship management by Ndee (Western Apache) leaders. On-the-job training received since I started working in Apache Territory in 1984 has enabled my work as a university researcher and principal in the Tucson-based nonprofit Archaeology Southwest.

Vernelda J. Grant is an enrolled member of the San Carlos Apache Tribe. She received her undergraduate degree in 1996, in Cultural Anthropology with a minor in English and in 1999, a Master’s degree in Applied Anthropology with an emphasis in Southwestern Archaeology from Northern Arizona University. In March 2000, Vernelda returned to her Tribe creating a new position and a new tribal Department. It has been a lifelong goal to work for her people as the Director and Tribal Archaeologist of the Historic Preservation & Archaeology Department.

In 1996, Vernelda interned with the Smithsonian Institution’s National Museum of Natural History Repatriation Office in Washington, DC. Vernelda has served three terms on the Arizona Governor’s Archaeology Advisory Commission, was appointed to the Advisory Council on Historic Preservation (DC Office) Native American Advisory Group, is an ambassador with the Americans for Indian Opportunity, and has served as Chair of the National Congress of American Indians Commission on Repatriation and Burial Sites Protection. In 2009, Vernelda was selected to participate in the Center for Progressive Leadership program where she was advised on active approaches in governance and legislative matters that affect cultural resources, historic preservation, repatriation and human rights laws.

Ms. Grant is active in grassroots, tribal, state, federal government-to-government work and consultation, and has testified in the general assembly of nation-states at the United Nations in New York City. Her extensive working knowledge and experience in cultural resource management including her formal training in anthropology and archaeology helps Vernelda to advocate for the protection and preservation of culture, language and history as well as sacred and holy places and landscapes important to the existence and spiritual livelihood of the San Carlos Apache Tribe, all Native American Tribes and Indigenous Peoples. She lives in Peridot, Arizona close to her family who have served as her role models and encouraged Vernelda of the importance of education, leadership and strength through prayer. 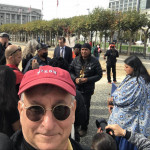 Vanessa Nosie a dedicated loving mother of 4 children, employed with the San Carlos Apache Tribe Historic Preservation and Archaeology Department as a Archaeology-Aide. She is a matriarch in protection of her tribe’s ancestral home and sacred places and community organizer. Vanessa has always been active and present for her community and people, hold positions such as the Co-Chair of Baase Sacred Organization, Member of the Mountain of the Spirit Runners protecting, a founding member and youth advisor of Native Youth Unite, organizing member of Apache Stronghold and organize member of the Poor Peoples Campaign, A National Call for Moral Revival. Vanessa has spoken before Congress and in a multitude of conferences, Vanessa still humbly returns to the lands in which she was raised, to continue to honor and protect the place and culture of home. That home being where her grandmother was born and raised, by her example Vanessa continues to be at service.