The Amazon Crisis in our Communities

The Amazon Crisis in our Communities

Over the next few years, Amazon is set to massively expand its already sprawling network of warehouses, and ultimately become the nation’s largest employer. The company’s quest for consumer market dominance will soon lead to an Amazon delivery station in just about every neighborhood, and the potential to disrupt other industries like grocery and brick and mortar retail. In the face of increased exposure to the company’s low road employment practices of high turnover, high injury rates, and low wages, workers and their neighbors are already fighting back. The Teamsters union is proud to host this panel with labor, environmental, and social justice partners who are helping build the power that working people will need to end the Amazon crisis in our communities.

This session is sponsored by International Brotherhood of Teamsters. 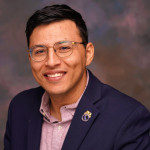 Mario Vasquez is the Communications Coordinator and an organizer with Teamsters Local 1932 in San Bernardino.

Donell Jefferson works at T-Force, formerly UPS Freight. He is a 15 year Teamster. He was instrumental in the organizing of first Overnight and later UPS Freight. Having been through both campaigns, Donnell knows the intimidation and harassment first hand from supervisors and management when workers try to organize under America’s broken labor laws. Now working with the Teamsters Volunteer Organizing Team, Jefferson is a key proponent of building community support for non-union workers, including Amazon workers, with Teamster members and the broader community.

Arlene joined Good Jobs First, a government watchdog that promotes transparency and accountability around the use of economic development subsidies, in 2020. Good Jobs First is home to Amazon Tracker, which compiles as many public subsidies as we can find given to the company: So far, at least $4.1 billion.
Before coming here, Arlene launched the California newsletter for the USA TODAY Network, providing news and analysis about the day’s happenings. She was part of the investigations teams at the Ventura County Star, and also wrote for The (Allentown) Morning Call, LA Times and Hispanic Link News Service.
Massive, highly profitable companies like Amazon – which often have lengthy records of worker misconduct – are some of the biggest winners from the current structure of economic development. Good Jobs First fights to change that.

Andrea Vidaurre (she/her) grew up in the unceded territories of the Tongva, also known as the “Inland Empire” of Southern California and graduated with a BA in Global Studies from the University of California, Riverside. She has lived at the intersections of multiple issues which led her to engage in work that advances her communities’ quality of life. Over the past couple of years, she has worked towards environmental justice throughout the Inland Empire. She is a co-founder, member and policy analyst of the Peoples Collective for Environmental Justice, a community based organization focused on fighting environmental racism and finding solutions through community work.