Democracy is Dying: How Do We Right the Ship of Democracy?

Democracy is Dying: How Do We Right the Ship of Democracy?

No greater modern threat exists to modern American democracy than the administration of Donald Trump. Daily chips and cracks are evident in our democracy—suppression of the vote; appointments of lower court and Supreme Court judges with little to no regard to the law—evident the slow death of the laws that guide and undergird our republic. We aren’t laying down during this moment—progressive patriots are championing the ideals that present an America that is just and good and provides equitable opportunity for all. That fight is evident in the push for impeachment, the lawsuits against unfair elections and the movement to restore the vote to returning citizens.

Jamiah Adams has produced educational, advocacy and documentary media for the internet, television, radio and film. Her consulting work went hand in hand with a keen acumen for social and digital media strategy as she advised organizations on how to augment their presence in the digital arena, using existing tools, including content management systems, mobile, online advertising, video and social media. She began her digital career at CBS Entertainment as a producer and transitioned from there to an outreach director position at Brave New Foundation and Films. Jamiah went on to produce web videos and content for diverse communities, from American Muslims to the LGBTQ community to Democrats and the NAACP. She uses her knowledge of production, coupled with executive management experience in both the mainstream and digital media to consult for advocacy, faith and policy organizations to improve the lives of working Americans and those who need their cause amplified. Jamiah’s specialties include: digital and communications political strategy; video; producing; social media; writing; diversity and spokesperson duties. 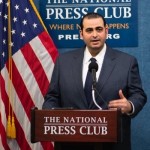 Abed A. Ayoub serves as the National Legal & Policy Director of the American -Arab Anti- Discrimination Committee (ADC), the country’s largest Arab American civil rights organization. Throughout his career Ayoub has worked to address issues impacting Arabs and Muslims in the United States, including matters related to discrimination, immigration, hate crimes, surveillance and profiling. Under his leadership the ADC Legal Department has successfully assisted and provide support to impacted community members across the country. Ayoub also works to enhance the community’s economic empowerment, and access to education.

Ayoub is a native of Dearborn, Michigan, which is home to the largest concentration of Arab Americans. Outside of his professional capacity Ayoub works to tackle the issue of hunger and homelessness in the Metro Detroit and Washington, D.C. Areas. He is co-founder of Third Pillar Charities, which provides relief and opportunity for the less fortunate.

Freechild co-leads Public Citizen’s work building a broad movement to get money out of politics and ensure that everyone’s vote counts. She also leads Public Citizen’s advocacy work on election security and holding voting system vendors accountable for ensuring machines are safe from hackers. She co-founded the Secure Our Vote coalition, which works on the state and local level to encourage election officials to secure the vote and allow for recovery should a computer error or hack occur.

Freechild also works to overturn the U.S. Supreme Court’s 2010 Citizens United ruling, which opened the floodgates to corporate spending in elections. She led Public Citizen’s successful campaigns in Vermont, New Jersey, Illinois, Delaware and Washington states formally calling for a constitutional amendment to overturn Citizens United. She also led Public Citizen’s outreach effort to build a broad consensus among nonprofits and membership organizations that a constitutional amendment is the necessary remedy for unbridled spending in elections. With local partners, she led the 2018 passage of the D.C. Fair Elections Act, the District of Columbia’s first small-donor matching campaign finance program.