Let Her Learn: Understanding and Dismantling the School-to-Prison Pipeline for Girls of Color

Let Her Learn: Understanding and Dismantling the School-to-Prison Pipeline for Girls of Color

The school-to-prison pipeline, the maze of policies and practices that unfairly pushes students out of school and into the criminal justice system, has long been framed as a boy’s issue. But we know from the data that girls are being targeted too. And it starts as early as preschool. Black girls are only 20 percent of the preschool population but 54 percent of preschool suspensions. These numbers are not the result of higher rates of misbehavior. Girls of color are often punished for minor and non-existent offenses, or the same offenses committed by their peers who are not punished. Come hear from a team of organizers and experts on how you can rally your community around this issue and shut down the school-to-prison pipeline.

Sabrina Joy Stevens (she/her) is an accomplished movement-builder, storyteller, and strategist. She has contributed to some of the most impactful human and civil rights movements of the last 20 years. She helps advocates cultivate brave and joyful strategic communications and campaigns for justice. She also teaches people how to use values-driven narrative techniques to neutralize mis- and disinformation. Her work has appeared in media outlets like MSNBC, The Washington Post, Education Week, The Hill, and more.

Professional educator of 25 years, this native of North Carolina has experience with both rural and urban diverse populations. After moving to Prince George’s County Maryland, Ms. McNair became involved in restorative discipline and trauma informed education. She was trained in Peacemaking Circles by Robert Spicer and The Community Justice for Youth Institute in Chicago, IL. She went on to receive her trainer’s license from The International Institute of Restorative Practices in Bethlehem, PA and is the owner of The Restorative Classroom where she offers trainings and consultations in restorative justice practices for school environments. Ms. McNair currently work for Prince George’s County Public Schools. 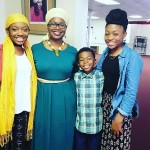 Letha Muhammad is the Director of Education Justice Alliance (EJA), based in Raleigh North Carolina. As Director, Letha is committed to dismantling the School to Prison Pipeline. She believes that the most effective way to have a positive impact on communities that are most adversely affected by the school to prison pipeline is to deal directly with the community. As such, her work includes engagement with families as well as Black and Latinx students in the Wake County school district to ensure their access to a quality public school education.

Along with her husband, Letha parents two school age children and one college student.

Becky Pringle is vice president of the National Education Association, the nation’s largest labor union and professional association for educators. A middle school science teacher with 31 years of classroom experience, Pringle has distinguished herself as a thoughtful, passionate advocate for educators and students, focusing on issues of educator empowerment and student success, diversity, and developing future leaders.

Pringle most recently served as NEA Secretary-Treasurer. A strategic thinker and leader, she was integral to the success of NEA’s work to transform the education professions and improve student learning. Most notably, she led the workgroup that produced the Association’s groundbreaking Policy Statement on Teacher Evaluation and Accountability—NEA’s first broad endorsement of the need for a student-centered, educator-led evaluation and shared accountability system.

Pringle has a long and notable record of Association advocacy at the national, state, and local levels. She began her leadership journey as a local president, and then went on to serve on the Board of Directors for NEA and the Pennsylvania State Education Association (PSEA). She also served two terms as a member of NEA’s Executive Committee where she distinguished herself as a thoughtful and passionate advocate for the nation’s public school educators and students.

Pringle has been recognized by education and social justice organizations for her commitment to educational equity. She is a recipient of the Black Women’s Roundtable Education Innovation & Social Justice Leadership Award from the National Coalition on Black Civic Participation, Woman of Power Award from the National Action Network and was named Community Woman of the Year by the American Association of University Women. The impact of her leadership is far-reaching, and includes serving as finance chair of the National Board for Professional Teaching Standards; on the Blue Ribbon Panel on Teacher Preparation for the National Council for Accreditation of Teacher Education; and on the Institute for Educational Leadership Task Force.

Zakiya Sankara-Jabar is the national field organizer for the Dignity in Schools Campaign and Co-Founder of Racial Justice NOW! Ohio. The Dignity in Schools Campaign is a national coalition of leaders who parent’s, students, grassroots organizers, advocates, teacher’s, and lawyer’s from 29 states and Washington District of Columbia. We organize to end the school to prison pipeline for Black students and other students of color in the United States.

Zakiya came to this work as a parent organizer pushing back on punitive and harsh punishment in schools when her 3-year-old was expelled from preschool. Through this organizing, Zakiya and other Black women in Racial Justice NOW successfully pushed the Dayton (Ohio) Public Schools to end suspensions and expulsions in Pre-K. Zakiya’s work and advocacy also laid the ground work for equity in Dayton’s universal preschool initiative.

Zakiya is a proven leader in successfully organizing Black parents to push back on schools that harm our children.