As a member of the progressive community, you may have marched next to brothers and sisters in the labor movement. You may know that workers have won some key victories on the shop floor and at the voting booth. But what else? Join us for this AMA-style panel with labor activists from diverse backgrounds. You’ll get a broad overview of the struggle for workers’ rights across the country and walk away with practical tips on how to build solidarity with the labor movement.

Rosemari Ochoa is a digital strategist, lecturer, and blogger about social change. By day, she’s an activist in the labor movement, recently working for AFL-CIO Nevada during the election and for the American Federation of Government Employees. By night, she’s striving to become a novice flan connoisseur.

She has also headed up social media for The Pew Charitable Trusts, the Smithsonian’s National Museum of Natural History and has worked at AIDS.gov, the Library of Congress, the Red Cross, and Planned Parenthood. Rosemari holds her M.A. from American University in Public Communications. 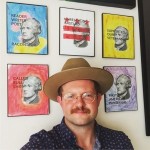 Reader, writer, raconteur committed to telling inclusive stories of American patriotism that advance a Third Reconstruction and the birth of a Fourth American Republic – one that is worthy of all the people of this Nation. I’m also a political campaigner, activist, unionist, and Methodist through training and experience. 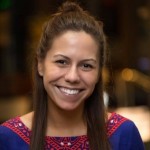 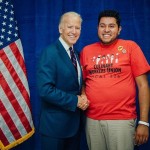 Nelson is a first-generation American born to parents who emigrated from Mexico. He fights so that his generation and the next have the opportunity to provide for their families. He is currently interning in the communications department at the Culinary Workers Union Local 226 in Las Vegas, the largest union and immigrant organization in Nevada. Nelson started his internship on a union leave-of-absence from New York-New York Hotel & Casino where he works as a Barista.
When he’s not making memes and writing Tweets, Nelson likes to support citizenship and voter registration drives. Since he found out his Union was involved in fighting for comprehensive immigration reform, he has learned that U.S. citizenship and worker’s rights go hand-in-hand. For the past year, he’s been learning all of the different ways communications supports organizing.
As a member of one of the largest and strongest union locals in the country, Nelson is proud of the work he is doing every day.

MARY CATHRYN RICKER is the executive vice president of the American Federation of Teachers. She was overwhelmingly elected to that position in July 2014 at the AFT’s biennial convention in Los Angeles. Ricker served as president of the Saint Paul (Minn.) Federation of Teachers, AFT Local 28, since 2005, as an AFT vice president since 2012, and a member of the AFT K-12 Teachers program and policy council since 2006. – See more at: http://www.aft.org/about/leadership/mary-cathryn-ricker#sthash.EBMWLKHo.dpuf