Anti-worker advocates in the Show Me State’s Legislature have in recent years tried to repeatedly push through bills that would curb workers’ collective bargaining rights and their ability to contribute to their union through so-called right-to-work and paycheck deception legislation. Those efforts have been fueled by corporate dollars. But Missouri isn’t the only state where this is going on. This panel will discuss the struggle for workers’ rights.

Veteran of Moore for Congress, Boyda for Congress, Sebelius for Governor, Kansas Secretary of State’s office, Davis for Kansas, DNC.

Theresa is a union organizer at UFCW Local 655. She has been an active member in Local 655 for twelve years, recognized for her powerful testimony against Right-To-Work legislation in 2015.

Nasheed represents the fifth district in the Missouri Senate, and formerly served in the House. In December, she was chosen to chair the Missouri Black Legislative Caucus. 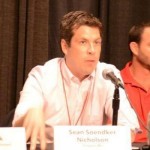 Sean Soendker Nicholson is a Principal at GPS Impact. Previously, he served as Executive Director of Progress Missouri, helping to found the communications and research organization in 2011. Before Progress Missouri, Sean was the Executive Director of Fired Up! Missouri and a Vice President at Kennedy Communications, a Democratic communications and research shop in Washington, DC. A proud Mizzou Tiger and Georgetown Hoya, he lives in Columbia, MO with his wife, Trista, and two sons, Judah and Abram.