Marriage Equality: Past, Present and Future

Marriage Equality: Past, Present and Future

Anti-gay attacks banning same-sex marriage, as well as pro-marriage equality legislation, ballot initiatives, judicial cases and electoral fights, have swept the country since 1996 when Congress passed the so-called Defense of Marriage Act. Since then, activists and campaigners have been criss-crossing the country working to secure equal marriage rights for all. This panel will bring together leading activists and experts to discuss what lessons can be learned from previous fights in California, Iowa, Maine, Minnesota, New York and Washington. Panelists will provide insight into how those lessons can be applied in a changing 2012 landscape and practical advice for launching an effort in your own state.

Monte joined grassroots solutions in 2002. In his client service role, Monte manages integrated grassroots engagement projects on campaigns up and down the ballot for a wide variety of clients. In addition to his considerable experience running large-scale and diverse voter contact programs, Monte has expertise in developing strategic plans and recommendations that help build core capacities and sustain the progressive infrastructure.

Richard Carlbom is the Campaign Manager of Minnesotans United for All Families, the official campaign that will defeat the constitutional amendment banning same-sex marriage. Before joining the campaign in September, Richard was Communications Director for Chris Coleman, the mayor of St. Paul. He also managed the successful 2010 re-election campaign of Representative Tim Walz. A 2004 graduate of Saint John’s, Carlbom served as the mayor of St. Joseph, Minnesota from 2005-2007.

Michael Crawford is Director of Online Programs at Freedom to Marry where he manages the organization’s websites, email program, online fundraising, and social media presence. He was a leading strategist for the successful campaign to win freedom to marry in Washington, D.C. with a focus on public education, community outreach, and communications strategy. Michael was named as one of The Advocate Magazine’s 2009 People of the Year and one of The Washington Blade’s Ten People Who Make Us Proud. He was awarded the Gay & Lesbian Activists Alliance Distinguished Service Award in 2010 for his work to win marriage in Washington, D.C. He was a 2011 fellow in The Pipeline Project’s 21st Century Fellows Program.

Dave Fleischer directs the Leadership LAB of the L.A. Gay & Lesbian Center. The LAB provides mentoring and support to leaders preparing to face or recovering from ballot measures on LGBT issues. Prior, Fleischer created and ran the national training program for the Gay & Lesbian Victory Fund and Foundation (1993-98) and created and directed the organizing and training department of the National Gay and Lesbian Task Force (1999-2006). Since 1993, Fleischer has been directly involved in 38 ballot measure campaigns on LGBT issues in 20 states; he wrote the comprehensive evaluation of the Prop 8 campaign, available online at www.Prop8Report.org. Fleischer also in 2006-2008 was part of the Industrial Areas Foundation team that increased African-American and Latino voter turnout in parts of Ohio that had previously suffered from persistent low voter turnout. 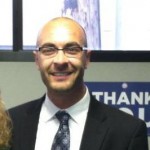