Victory in Detroit on the Water Crisis!

Victory in Detroit on the Water Crisis! 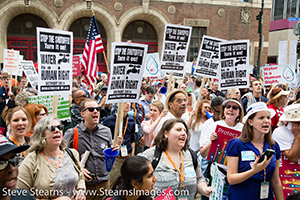 We’re excited to let you know about a big win that happened today in Detroit: Control of the Detroit Water and Sewage Department has been returned back to the hands of the people. Your activism, energy and help in generating media attention at Netroots Nation played a big role here.

Kevyn Orr, the city’s unelected emergency manager, relinquished control back to the mayor’s office. It’s expected that the mayor and city council will approve a water affordability plan that caps a household’s water bill at no more than 3 percent of their income.

There’s a lot of work to be done to get Detroit residents back on their feet, but returning control to Detroit’s elected officials is a huge step.

In the meantime, you can help a Detroit resident directly by submitting a payment to the Detroit Water and Sewerage Department on their behalf.

The announcement comes a week after the department said it would grant a 15-day moratorium on the shutoffs that have been plaguing the city.

This is huge news to those who are currently without water or struggling to pay their bills.

Thanks to groups like the People’s Water Board Coalition, Michigan Welfare Rights Organization, We the People of Detroit, Detroit Water Brigade and more for their round-the-clock efforts to assure that every resident has access to clean water.

Remember, you can click here to help pay the water bill of a local resident who is struggling.

#NN14: Saturday Highlights
We wanted to share a few quick highlights from our last day of programming: More on the Detroit water crisis In this morning's keynote session, local activists shared more about...
180 Likes5,731 Comment(s)

#NN14: Thursday highlights
Here's your daily wrap up as we conclude another successful first day of Netroots Nation! Please consider sharing this with those not able to join us. Here are some highlights...
187 Likes2,918 Comment(s)