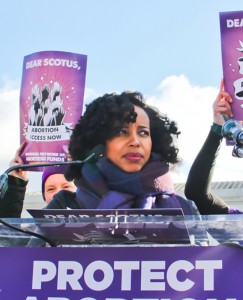 Yamani Hernandez is the Executive Director of the National Network of Abortion Funds (NNAF), an organization that builds capacity and power of grassroots member organizations and leverages their direct access to abortion seekers for cultural and political change. Her leadership is defined by a commitment to reproductive justice and to cultivating leadership for women of color and young people. Yamani leads her nationwide team from Chicago, where she was recently listed among “Chicago Women Who Owned 2015” by Viva la Feminista. Yamani has been a proud member of the Strong Families leadership team, a Ford Foundation Public Voices Fellow, and a writer for Echoing Ida, a program of Forward Together that supports leadership and amplifies the voices of Black women. Her writing and perspectives have been featured in outlets such as RH Reality Check, Progress Illinois, The Reader, EBONY, The Nation, Fusion, Truth-Out, and she has appeared on MSNBC.