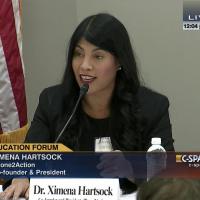 Ximena Hartsock is the President and co-founder of Phone2Action, a venture-backed, award-winning civic technology startup based in Washington, D.C. Prior to founding Phone2Action she was a member of the executive cabinet of former Washington, D.C. Mayor Adrian Fenty, serving as the Director of the Department of Parks and Recreation and later as the Chief of Staff of the City Administration. As Parks Director, she managed a $41M annual operating budget and more than 1,000 employees. During her tenure, she oversaw renovations of DC public pools, the completion of DC’s state of the art Olympic facility, Wilson Pool, the construction of numerous athletic fields and parks, and the implementation of wellness programs for seniors, youth and families. Before this position, Hartsock was DC Public Schools Deputy Chief for Teaching and Learning under the education overhaul led by Michelle Rhee and Adrian Fenty. In that role she led key reforms, including the expansion of online learning, International baccalaureate and Dual Language programs, the implementation of a comprehensive “out of school time” program that served students after-school, on weekends and in the summer, and the implementation of a credit recovery program for students at risk of dropping out that helped improve DC’s historically low graduation rates. Hartsock came to that position after working in DC Government as a federal project administrator, and school principal. In 2013, her company Phone2Action won the prestigious SXSW Interactive Technology competition. Phone2Action has been featured, among others, in the Washington Post and New York Times. In addition to her responsibilities at Phone2Action, Hartsock serves on the Board of Industry Leaders of the Consumer Electronics Association (CEA). A native of Chile, she holds a Doctorate in Policy Studies and Administration from The George Washington University.