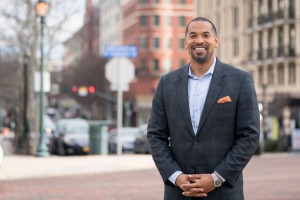 Will Jawando is an attorney, activist, and community leader with an unwavering dedication to working with all communities to ensure economic prosperity and guaranteed civil rights. He has worked with House Democratic Leader Nancy Pelosi and Senator Sherrod Brown. During the Obama Administration, he served as the Associate Director of the White House Office of Public Engagement and as an advisor to U.S. Secretary of Education Arne Duncan in the U.S. Department of Education. Described by revered Congressman John Lewis as “the progressive leader we need,” in 2016 Jawando was the youngest candidate in Maryland’s 8th District congressional race. A voice of authority on issues surrounding the nation’s political climate, public policy, and social justice, he has been featured in an array of national media outlets including, MSNBC, the New York Times, The Washington Post, MTV, and NY Magazine. He resides in Silver Spring, MD, with his wife and three daughters. Will is a Democratic Nominee for County Council at Large in Montgomery County, Maryland.