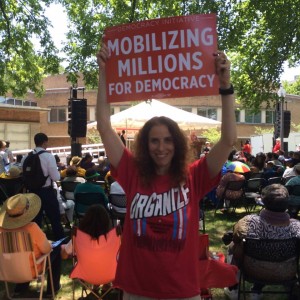 Tova Wang is Director of Democracy Programs for the Communications Workers of America and Senior Democracy Fellow at Demos. She has 20 years of experience working on improving democracy. Tova has focused on issues related to greater political inclusion in the United States, including major studies on increasing voter participation rates among low income people, communities of color, naturalized immigrants, women and Native Americans. Her critically acclaimed book, The Politics of Voter Suppression: Defending and Expanding Americans’ Right to Vote, was published in 2012 by Cornell University Press. She also consults international organizations on voting rights and election reform in countries around the world. Her commentary on voting and participation has appeared in numerous print media outlets, including the New York Times, the Washington Post, The Hill and Politico, and she has appeared on numerous national television and radio news shows.