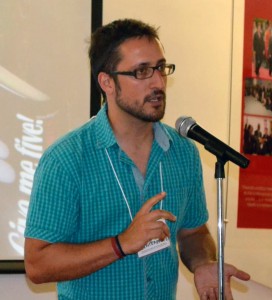 Currently a community interpreter/translator and language justice consultant, Tony has worked for 15 years in farmworker, labor, trade, anti-war, and immigrant rights movements in the US and Mexico. After serving as Assistant Director of Student Action with Farmworkers in North Carolina, he worked with Witness for Peace to lead delegations of US citizens to Mexico to explore the impacts of US-led policies and learn about creative alternatives to neoliberalism. He’s done language work for the past 7 years as part of a broad movement based in the US South that understands language as a key tool for resisting and building alternatives to structural oppression. Through that work, he co-founded the Austin Language Justice Collective, and has interpreted, translated, and led workshops across the US and Mexico. Along with other language workers, has collaborated closely with UFE over the past year to expand its multilingual justice efforts.