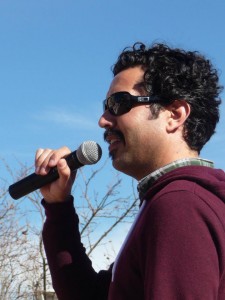 Tomás Garduño is the Co-Director of the SouthWest Organizing Project (SWOP), a 32 year-old grassroots social justice movement organization in New Mexico. He has been a staff member of SWOP for over 5 years, and a member for 9 years. He is 33 years-old, a Native New Mexican Chicano, born and raised in Albuquerque, New Mexico. He lived in Portland, OR for seven years where he graduated from Lewis & Clark College, did student and anti-racist organizing in the anti-globalization movement culminating in the WTO protests in Seattle, and has been doing social justice work ever since. He has worked for Western States Center, Community Alliance of Tenants, and co-founded ‘ROOTS! Reclaiming Our Origins Through Struggle. Most recently before joining SWOP he was a campaign organizer with the Southwest Network for Environmental and Economic Justice. He is also a traditional organic farmer and avid bicyclist.