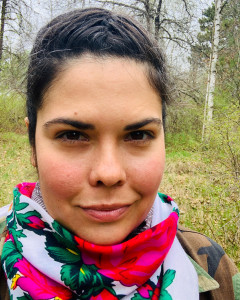 Tara Houska (Couchiching First Nation Anishinaabe) is a tribal attorney, founder of Giniw Collective, and a former advisor on Native American affairs to Bernie Sanders. She spent six months on the frontlines fighting the Dakota Access Pipeline, and is currently engaged in the movement to defund fossil fuels and a years-long struggle against Enbridge's Line 3 pipeline. She is a co-founder of Not Your Mascots, a group committed to positive representation of Native peoples. She is a TED speaker, gave a Harvard keynote, received an “Awesome Women Award” from Melinda Gates and a Rachel’s Network Catalyst Award, is featured in “Women: A Century of Change” by National Geographic, and was named an “Icon” on the cover of Outside Magazine’s 40th Anniversary edition. Tara has contributed to the New York Times, The Guardian, Huffington Post, Indian Country Today and been featured on CNN, MSNBC, CBS, Democracy Now, and BBC. She lives in a pipeline resistance camp in Northern Minnesota.