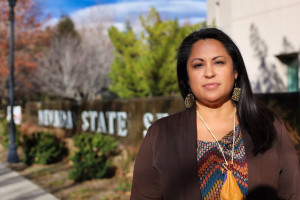 Tammi Tiger is a descendant of Muscogee people and a citizen of the Choctaw Nation of Oklahoma. She leads the Native Vote work in southern Nevada for the Las Vegas Indian Center, in partnership with national Native-led organizations and Silver State Voices, a coalition of community organizations dedicated to civic engagement & ensuring that underrepresented Nevadans are at the cornerstone of our democracy. Tammi’s career in public service started with local government, where she has over 20 years of experience in Administration. She was appointed to the Nevada Indian Commission by the Governor in 2021 and is an active participant in several local and national organizations including; UNLV Native American Alumni Club, United Natives, and Native Organizers Alliance. She holds a Master's Degree in Public Administration with undergraduate work in Nonprofit Management, and Information Systems. She grew up intertribal as an urban Native in Los Angeles, CA and Las Vegas, NV and is committed to developing a statewide ecosystem of urban and Tribal citizens in Nevada to build Native power.