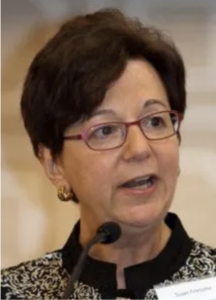 Susan Frietsche is a Senior Staff Attorney and the founder and director of the Western Pennsylvania Office of the Women’s Law Project, where she has worked since 1992. Her law practice focuses on providing legal services for the 17 freestanding abortion facilities in Pennsylvania, including direct representation in state and federal courts, amicus representation, compliance work, legislative advocacy, representation before state licensure boards, and strategic defense from anti-abortion violence and disruption. Frietsche has appeared as counsel for young women seeking confidential abortions in over 50 judicial bypass cases. In addition to her reproductive rights practice, she engages in civil litigation and advocacy involving sexual harassment and sexual assault in education and employment settings, Title IX athletics, LGBTQ discrimination, economic security, incarcerated women, criminalization of pregnancy, and race and gender bias in the legal system. She has argued before the U.S. Courts of Appeals for the Third and Fourth Circuits as well as Pennsylvania appellate courts. She is the co-author of “Women on the Court and the Court on Women,” in The Supreme Court of Pennsylvania: Life and Law in the Commonwealth 1684-2017 (John J. Hare, ed., 2018), and “Preserving the Core of Roe: Reflections on Planned Parenthood v. Casey,” published in the Yale Journal of Law & Feminism. She is a member of the adjunct faculty of the University of Pittsburgh School of Law, where she teaches Reproductive Law and Policy and Gender and the Law. Prior to joining the staff of the Women’s Law Project, Frietsche was the Deputy Director of the Pennsylvania ACLU and the organization’s state lobbyist. She is a graduate of Bryn Mawr College and Temple University Law School.