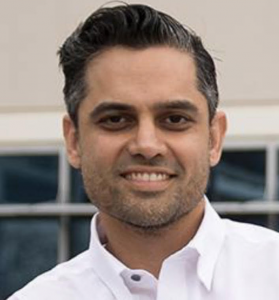 Sri was raised in a middle-class family by an immigrant father and a mother whose roots date back to the Texas Revolution. Growing up in Houston, Sri personally experienced the same challenges that our communities are facing today: flooding, gun violence, a broken criminal justice system, and unequal access to education, which forced him to take a bus across town every day to attend a better public school. For Sri, the most personal issue is the importance of affordable, quality healthcare. When Sri was 18, his father was diagnosed with leukemia, and Sri dropped out of the University of Texas to come home to care for him. After Sri’s father passed away, medical bills left their family on the verge of bankruptcy, and Sri helped raise his three younger siblings. Working several jobs, he graduated with honors from UT. Sri later received a Pearson Fellowship to serve as a defense, foreign policy, and veterans’ affairs advisor in the U.S. Senate, working on some of the most critical threats facing our national security. Sri went on to earn a Master’s Degree in Public Administration from Harvard, where he started an initiative called “Breaking Bread,” aimed at reducing the partisan hostility and divisiveness afflicting our country. Inspired by a calling to serve his country, Sri was commissioned as a United States Foreign Service Officer by Secretary of State Colin Powell. In the Foreign Service, Sri served tours overseas in Iraq, Israel, Russia, Taiwan, and Jamaica, promoting American values, such as women’s rights, a free press, and religious tolerance. He speaks English, Spanish, Hebrew, Hindi, Russian, and Mandarin Chinese.