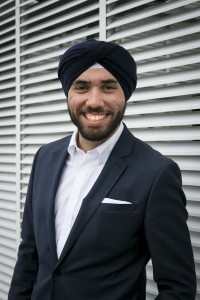 Sim J. Singh joined the Sikh Coalition as the National Advocacy Manager in May 2017 after becoming highly motivated to work on advocacy issues that challenge political rhetoric against immigrant and minority communities. Singh’s work focuses on grassroots and national advocacy against hate crime, school bullying, employer discrimination, and racial profiling. Singh has been quoted in publications that include CNN, NBC, and Huffington Post and has appeared on national and international broadcast interviews. Additionally, he has presented remarks to government offices and at national conferences, including the American Bar Association. Singh is a licensed attorney admitted to practice in Washington, D.C. and Florida. Prior to joining the Sikh Coalition, he developed apps that provide free legal resources for highly vulnerable communities and worked in governmental affairs through prior positions at Facebook and the U.S. Chamber of Commerce. Born and raised in Germany, Singh comes from a multicultural background. Singh holds his Masters of Law from Georgetown University, a Juris Doctor, and a Bachelors in Management Information Science. Singh is an active member with the South Asian Bar Association of Washington, D.C. and is a committee advisor to the International Associations of Chiefs of Police on Enhancing the Response to Hate Crime. Select articles, publications and appearances: CNN, NPR, NBC News, ROI NJ, Times Ledger, India West, and Times of India