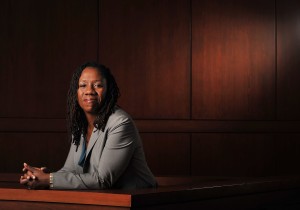 Sherrilyn Ifill is the seventh President and Director-Counsel of the NAACP Legal Defense and Educational Fund, Inc. After graduating law school, Ms. Ifill served first as a fellow at the American Civil Liberties Union and then for five years as an Assistant Counsel in LDF’s New York office, where she litigated voting rights cases. During her tenure at LDF, Ms. Ifill litigated numerous cases including the landmark Voting Rights Act case Houston Lawyers’ Association vs. Attorney General of Texas, in which the Supreme Court held that judicial elections are covered by the provisions of section 2 of the Voting Rights Act. In 1993, Ms. Ifill left LDF to join the faculty of the University of the Maryland School of Law, where, in addition to teaching Civil Procedure, Constitutional Law and variety of seminars, she continued to litigate and consult on a broad and diverse range of civil rights cases. While at Maryland she developed an environmental justice clinical offering and co-founded one of the first legal clinics in the nation focused on removing legal barriers to formerly incarcerated persons seeking to responsibly re-enter society. Since returning to LDF, Ifill has increased the visibility and engagement of the organization in cutting edge and urgent civil rights issues including policing reform, the Detroit water crisis and transportation inequity. At critical moments during national unrest in 2014, Ifill’s voice and vision framed the issue of policing reform and urban deprivation with powerful clarity in media appearances, op-eds and speeches. She is a sought-after speaker and strategist whose counsel is sought by government officials, civic and community leaders and national civil rights colleagues. A critically acclaimed author, her book “On the Courthouse Lawn: Confronting the Legacy of Lynching in the 21st Century,” reflects her lifelong engagement in and analysis of issues of race and American public life. Ifill is the immediate past Chair of the Board of U.S. Programs at the Open Society Institute, one of the largest philanthropic supporters of civil rights and social justice organizations in the country. She currently serves on the global board of the Open Society Foundations, and on the board of Equal Justice Works, the National Constitution Center and the Learning Policy Institute. Ms. Ifill is a graduate of Vassar College, and received her J.D. from New York University School of Law.