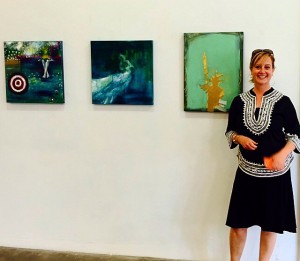 Artist and writer, Sheila Cameron, left mainstream entertainment to focus on art and family in 2005. Executive and producing positions at companies like HBO, Matt Damon and Ben Affleck’s LivePlanet, MTV, American Photo Magazine and Movieline.com gives her painting and digital engagement a unique perspective. She generated world-wide attention with the FREE KATIE site and t-shirts and broke down barriers between art worlds with her online only, solo show and auction, “Jerry Saltz Personally Invited Me to Hell and I’m going”. She received her BA in Fine Art and Writing from Loyola University in Maryland and continues explore the role of fine art in entertainment, social media and activism from her home studio in Nevada City, California. Although she is in Northern California now, she keeps personal and professional ties with Los Angeles, the city where she spent most of her life. Since the presidential election of 2016 she has used her skills to advocate for women's issues through Indivisible Women Nevada County and as organizer of The Women's March Sacramento.