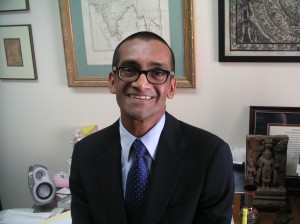 Shayana Kadidal is senior managing attorney of the Guantánamo project at the Center for Constitutional Rights in New York City. He is a 1994 graduate of Yale Law School, a former law clerk to Judge Kermit Lipez, and taught at Michigan Law School this spring. In his 12 years at the center, he has worked on a number of significant cases in the wake of 9/11, including challenges to the detention of prisoners at Guantánamo Bay (among them torture victims Mohammed al Qahtani and former CIA ghost detainee Majid Khan), which have twice reached the U.S. Supreme Court, to the "material support" statute (Holder v. Humanitarian Law Project, decided by the Supreme Court in 2010), to the low rates of black firefighter hiring in New York City, and to the NSA's warrantless surveillance program. Along with others at the center, he currently serves as counsel to WikiLeaks publisher Julian Assange.