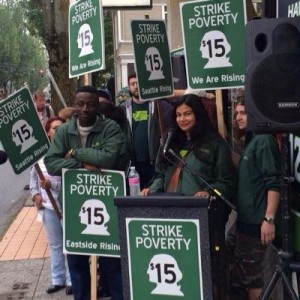 Sejal Parikh is Executive Director of Working Washington. Previously, Sejal had served as Working Washington’s fast food campaign director since the first Seattle fast food strikes. In that role, she was responsible for coordinating strategic mobilization, policy, and communications efforts which culminated in the historic vote to pass the nation’s first citywide $15 minimum wage law. She was also closely involved with Working Washington’s landmark effort to organize workers and raise standards at Sea-Tac Airport. Before joining Working Washington, Sejal developed policy that expanded health care access for homecare workers in Montana, and provided volunteer legislative support for a national cancer advocacy group. Sejal has a J.D. and an M.S in Mechanical Engineering from the University of Michigan, and, although she has lived in Seattle for several years, still cheers for her Wolverines.