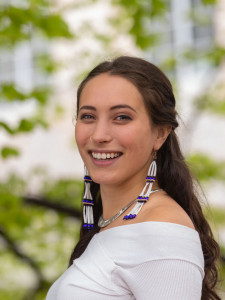 Ruth (Łchavaya K’isen) is a Dena'ina Athabaskan and Ashkenazi Russian Jewish woman, raised in Dgheyay Kaq (Anchorage), Alaska. She is a member of the Curyung Tribe from the Lake Iliamna region, and also has roots in Bristol Bay. She is a recent graduate from Brown University, built on occupied Wampanoag and Narragansett lands, and received a BA in Critical Development Studies with a focus on Indigenous resistance and liberation. Ruth is the Climate Justice Organizer for Native Movement, a matriarchal grassroots Indigenous organization that fights for the rights of Indigenous peoples, our lands and waters, and justice for our ancestors and descendants. She has worked many years towards climate justice and a regenerative economy for all on her lands and beyond, her work also includes international advocacy, including attending the UN Permanent Forum on Indigenous Issues, the UN Youth Climate Summit, COP25 in Madrid, Spain, and the Continental Gathering of Indigenous Women of the Americas (ECMIA). She is a daughter, a granddaughter, and aunty, a language learner, a traditional beadworker, and a subsistence fisherwomxn.

Many of you are asking about Netroots Nation 2021 plans. We’re happy to report that #NN21 WILL happen, but we haven’t yet announced our plans for dates and format. As we keep a close eye on the latest COVID-19 developments and weigh our options, know that we are doing so to ensure that NN21 is safe and accessible for as many people as possible. Check back soon for more details, and make sure you’re on our email list for announcements.