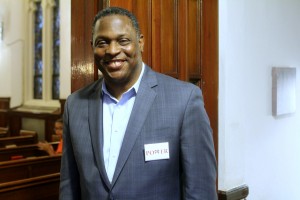 Rev. Holston is a recognized community activist, pastor, and leader known for advocating for racial and economic justice. As the Executive Director of POWER: Philadelphians Organized to Witness, Empower and Rebuild; he organizes 65 + congregations representing nearly 50,000 individuals across the city of Philadelphia, surrounding counties and the center of the state. POWER believes building communities of opportunity to work for our faith is the foundation of everything we do and racial justice is at the center of that work. POWER, in coalition with other groups has won $600 million in additional education funding,and a fair funding formula. POWER also won 4000 airport workers millions of dollars in additional wages and union representation. This served as a model for organizing across the country. Reverend Holston is the Senior pastor of Janes Memorial United Methodist Church as well as a businessman, entrepreneur, college professor, speaker and community activist. His most important role, however, is serving as a devoted and loving husband and father.