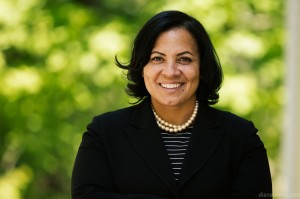 Suffolk County District Attorney Rachael Rollins is the chief law enforcement officer for Boston, Chelsea, Revere, and Winthrop, Massachusetts, and oversees an office of about 300 people handling about 25,000 new cases each year. She took office on Jan. 2, 2019, as Suffolk County’s 16th district attorney, the first woman to be elected to that position in Suffolk County history, and the first woman of color ever to serve as a Massachusetts district attorney. An attorney for 20 years with degrees from Northeastern University School of Law and Georgetown University Law Center, District Attorney Rollins has served as a field attorney with the National Labor Relations Board in Boston, safeguarding employees’ rights; as an attorney with the law firm of Bingham McCutchen, handling first amendment, labor and employment, complex civil litigation, and criminal defense matters; and participated in an assistant district attorney rotation in the busy Brockton District Court. Beginning in 2007, District Attorney Rollins served as an assistant United States attorney with the US Attorney’s office in Boston, handling cases that included fraud, employment discrimination, sexual violence, child abuse, gun trafficking, narcotics, and public integrity matters. In 2011, she was selected by Governor Deval Patrick’s administration as the first person of color to serve as the General Counsel of the Massachusetts Department of Transportation. Six months later, the MassDOT board of directors voted her in as the first female general counsel of the Massachusetts Bay Transportation Authority. During her time at MassDOT and the MBTA, District Attorney Rollins led and managed over 150 people in both agencies’ legal departments and audit departments, the claims department, parts of both HR functions, labor functions and the Office of Diversity and Civil Rights. She worked closely with the governor’s secretary of transportation and the general manager of the MBTA, handling all of the legal work for the commuter rail procurement – the largest procurement in the history of the Commonwealth at the time – and thousands of other cases per year. In 2013, District Attorney Rollins was recruited to become the chief legal counsel of the Massachusetts Port Authority, reporting directly to CEO Tom Glynn and the Massport board of directors. She worked to increase the minimum wage at Logan Airport well before the wage was raised in the Commonwealth and personally oversaw and led the investigation into a plane crash that resulted in 7 deaths. District Attorney Rollins is a former Governor Deval Patrick appointee to the Judicial Nominating Commission, a past president of the Massachusetts Black Lawyers Association, and was elected and served a three year term on the Boston Bar Association Council. In 2018, the people of Suffolk County chose District Attorney Rollins to represent them as their district attorney – and to effect meaningful, substantive change and reform to the criminal justice system. She pledged to pursue that mission tirelessly by reducing incarceration, correcting racial and ethnic disparities, adopting alternatives to traditional prosecution, focusing the offices limited resources on serious and violent crimes, and improving relationships between law enforcement agencies and the communities they serve.