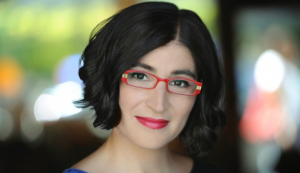 Farsad, an Iranian‐American, was recently named one of the 50 Funniest Female Comedians by Huffington Post and has written, directed and/or performed on MTV, Comedy Central, PBS, IFC and umpteen web shows. She recently created "Class Parents" and directed "The Book of Mom" series both for Nickelodeon. She is a founding principal of Qualified Laughter - the social justice arm of Vaguely Qualified Productions - where she co-created the AFL-CIO Collective Bargaining video series and SEIU's Healthy Americans Against Reforming Medicine series, among others. She has regularly appeared on the Joy Behar Show and in venues ranging from Town Hall in New York to the Laugh Factory in LA. She is also director of the recent feature film release “Nerdcore Rising” (SXSW, New Video distribution). She is in post-production on the feature film "The Muslims Are Coming!" starring Jon Stewart, Lewis Black, Rachel Maddow, Janeane Garofalo, and others.