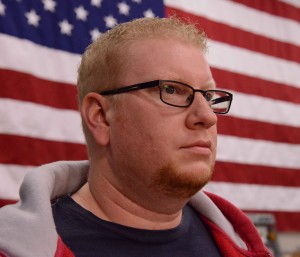 Will Branch, 38 years old, has been a skilled maintenance worker in the Assembly area of Volkswagen’s Chattanooga plant for nearly four years. Prior to Volkswagen, he worked at other manufacturing facilities. Will, an active leader in the UAW Volkswagen organizing campaign, joined the Volkswagen Leadership Council and now is involved in organizing UAW Local 42, the new local union for Volkswagen workers. He spent the majority of his life in the South. He was born in California, but moved to the Chattanooga area at age 14. Will was somewhat opposed to unions in the past and considered himself politically moderate to conservative. When workers started organizing at Volkswagen, he gained an interest and began to seek information about their motives as well as those of the UAW and Volkswagen. It took him little time to make his decision, and his support for the union has only grown stronger.