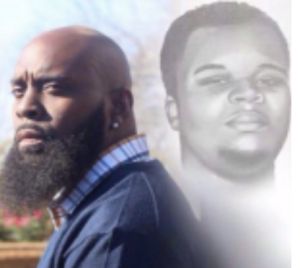 In Ferguson, MO on August 9, 2014 unarmed 18-year-old Michael Brown, Jr. was shot and killed by white police officer Darren Wilson. Michael had just graduated from high school and was scheduled to begin vocational training classes just two days later. After his graduation, he told his father Michael Brown, Sr. “One day, the world is gonna’ know my name. I’ll probably have to go away for a while, but I’m coming back to save my city.” Unfortunately, those words have come true for the Brown family, and Mike Brown, Sr is bringing his story and his foundation, Chosen for Change, to Colleges and Universities across the Nation. “The name ‘Mike Brown’ has become the national symbol of police shootings of unarmed Black men. For me, I feel obligated to keep stressing the deeper meaning of his words. Because of my son’s death and the justice, we’re still seeking, hurting people, grieving people who’ve lost their children to gun violence or police brutality reach out to me. They invite me to speak at gatherings. There is a small level of comfort in being in the company of the wounded, the lost, the other parents who understand that we can’t possibly ‘move on,’” – Mike Brown, Sr. Michael Brown, Sr. decided to turn the pain and challenges of losing his son into an opportunity of change. Thus, “Chosen for Change Foundation” was born in loving memory of Michael Brown, Jr. It’s an organization whose purpose is to empower youth by helping them realize their potential for greatness.