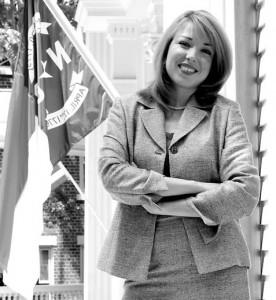 Melissa Price Kromm is the Director of North Carolina Voters for Clean Elections, where she has served as its lobbyist and leader of the statewide pro-democracy coalition for the past twelve years. The coalition coordinates advocacy in structural democracy, voting rights, campaign finance reform, government ethics and transparency, redistricting reform, judicial independence, the right to protest, and election crisis prevention. Kromm led efforts to pass campaign finance disclosure reform, voting rights reform, and stop attacks on judicial independence. Recently, Kromm led the coalition to stop bills promoting campaign finance secrecy, attacking the freedom to vote, limiting the right to protest, and spearheaded pioneering legislation to prevent election subversion. Before joining North Carolina Voters for Clean Elections, Kromm was part of a successful effort to pass same-day voter registration at early voting sites in North Carolina and pre-registration of 16 and 17-year-olds.