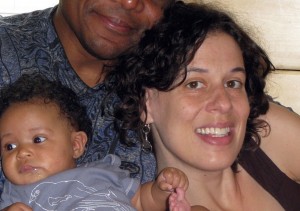 Melissa Giraud is the co-founder/director of EmbraceRace, a community of adults supporting each other to raise a generation of kids who are brave, informed and proactive on matters of race and racial justice. Melissa is a first-generation American, biracial (black/white) daughter of a French Canadian mother and Dominican (Dom-in-EEK-an) father, (as in: from the island of Dominica, NOT the Dominican Republic). She is often read as white or ethnically ambiguous (“what are you?!?”) and cannot remember a time when she wasn’t aware of her undeserved white/light privilege compared to others in her family and neighborhood. Professionally, she has been most interested in supporting learning and life outcomes for underserved students and families, especially immigrant girls and girls of color. Those driving concerns have shaped her work as an educator, NPR producer, education technology strategist, foundation consultant, and now as a co-founder of EmbraceRace. Melissa is mom to super reader and planet lover Lola (9) and storyteller and singer Lena (6), and partner to and co-parent with Andrew Grant-Thomas, who also has many talents and interests! Racially, Andrew is black American and the girls are socially identified as black or bi/multiracial. So far, they call themselves biracial.