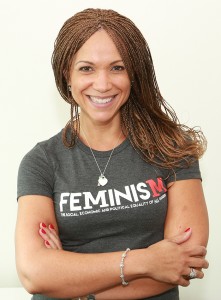 Professor Melissa Harris-Perry is the Angelou Presidential Chair at Wake Forest University. There she is founding director of the Anna Julia Cooper Center and co-director of Wake the Vote. Melissa is editor-at-large of Elle.com and a contributing editor at The Nation. Along with Dorian Warren, Harris-Perry is principal and co-host of Freedom on Tap, an independent media project combining live events, digital, and audio content. From 2012-2016 she hosted the television show “Melissa Harris-Perry” on weekend mornings on MSNBC and was awarded the Hillman Prize for broadcast journalism. She is an award-winning author and sought after public speaker, lecturing widely throughout the United States and abroad. Harris-Perry received her B.A. degree in English from Wake Forest University and her Ph.D. degree in political science from Duke University. She also studied theology at Union Theological Seminary in New York. Harris-Perry previously served on the faculty of the University of Chicago, Princeton University, and Tulane University. Professor Harris-Perry has been awarded honorary degrees from many universities including Meadville Lombard Theological School, Winston-Salem State University, Eckerd College, and New York University.