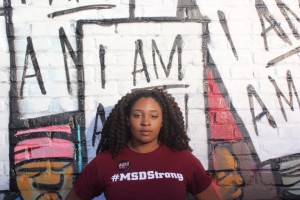 Mei-Ling Ho-Shing, like many of her classmates, became an activist after she survived the shooting at Marjory Stoneman Douglas High in Parkland, Florida that left 17 of her classmates and teachers dead. In the wake of the tragedy, and on the heels of nationwide school walk-outs and the March for Our Lives, Ho-Shing called for more than gun law reform alone. She’s demanding an intersectional approach to the #NeverAgain movement. Mei-Ling began her activism by calling and leading a press conference to amplify the voices and experiences of students of color, marking a new generation of activist aiming to be fiercely intersectional. Mei-Ling has addressed audiences on local and national platforms, including the National Young Feminist Leadership Conference, 50 Years After King: I AM 2018 Mountaintop Conference, Illinois Education Association Representative Assembly and the United State of Women 2018 Summit. Mei-Ling has been featured in local and national media outlets including Ms. Magazine, Essence Magazine, Seventeen Magazine, Florida Sun-Sentinel, Westside Gazette USA Today and the Washington Post. She is inspired to give voice to radical change in gun laws and hopes to pay it forward by becoming a global social justice leader.